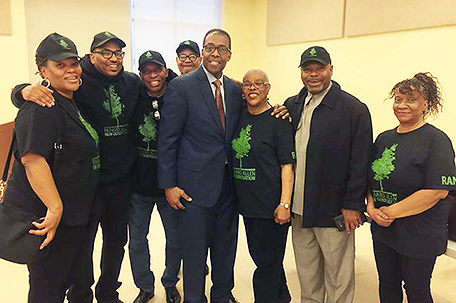 On a chilly April evening, 50 people gathered at the John F. Street Community Center, located at 11th and Poplar Street, to ask Philadelphia City Council President Darrell Clarke about the future of their status as Philadelphia Housing Authority residents in the Richard Allen Homes now that the $100 million Quaker Building housing development in their neighborhood has become a reality.  A few of the long-term residents present at the meeting expressed a common concern; feeling like strangers in a neighborhood that they have lived in all their lives due to a lack of information from PHA —particularly about how area development may affect their PHA residency.

In addition, residents complained about the lack of consistent opportunitiesto have a dialogue about the broader impact area development has on the future direction of their neighborhood.

“I thank PHA for the positive changes in the neighborhood,” says Wysena Williams, a resident of Richard Allen Homes for 30 years.

“But, if they [developers] are building up this neighborhood, and putting million dollar homes in the area, where are we going to go?,” Williams asked. 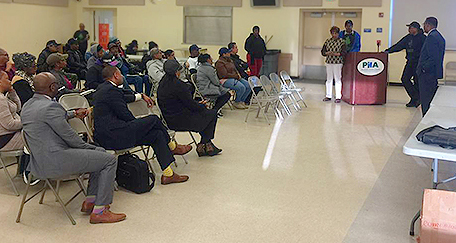 Williams’ sentiments echo what many residents and people who grew up the in the Richard Allen footprint feel — a combination of fear and frustration whenever challenged neighborhoods become cash cows for real estate developers, leaving the discussion of neighborhood jobs and tangible economic improvements for neighborhood residents mysteriously out of the long-term economic benefit discussions.

“We are not anti-progressive development.  We just feel that development should not be at the expense of people who have built their lives here.  They should be included in the prosperity,” said A. Bruce Crawley, a former resident of the original Richard Allen Homes and a founding member of the Richard Allen New Generation (RANG) Resident Community Organization (RCO). 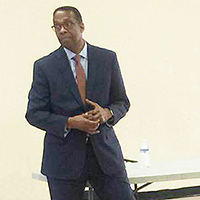 If you grew up in North Philadelphia, or lived there for some time, chances are you met someone who lived in or near Richard Allen Homes.  The original Richard Allen Homes, built in 1942, were the largest housing development in the Philadelphia Housing Authority with over 1,300 units.  Some 40 years later, the heavy concentration in the Richard Allen Homes of some residents living in extreme poverty created conditions that invited the problems which plague many urban areas —crime and drugs —only more concentrated.  To many of the New Generation members, attending the community meeting, dressed in green shirts and matching hats, the old Richard Allen has become a blur of myth and reality of once was.  The current residents of Richard Allen have benefited from PHA’s approach to public housing over the last 20 years– manicured lawns, single family homes, car garages, all positive changes.   Living through what was Richard Allen and what is Richard Allen, some residents at the meeting expressed satisfaction with their current housing status.  But what the future may hold— particularly as the new development changes  income and racial demographics — has become unsettling for some residents.

“Just because we are low-income renters in this neighborhood does not mean we [shouldn’t] know what [is] going on or be included,” Williams said.

Williams works the 11 am to 2 pm shift at her job, but wanted to come to the meeting before going to work to show her commitment to being involved in the future of her neighborhood.

City Council President Clarke said he would continue to open up a dialogue with PHA to make sure that resident concerns about their rental status was clear and offered to come back to a community meeting to provide updates on progress.

“There is talk about building affordable housing, but if you don’t have a job or income, then nothing is really affordable to you,” said Crawley.

The RANG RCO has been able to take what initially was challenging tension between the Post Brothers developing the Quaker Building and the residents’ objections, and turned it into a win.   With the RCO’s collaborative leadership, RANG has been able to establish with the Post Brothers a community development agreement which includes at least 20 skilled jobs in the trades, electric, carpentry and plumbing, for trained Richard Allen residents, in addition to 50 percent of a combination of skilled trade and labor positions to qualified city-wide applicants of color.

The RCO accomplished this collaboration the old-fashioned way– using grassroots activist manpower and leveraging the zoning board’s rules to have all parties come to the table for an agreement.

“We think this is a good deal,” said Crawley.

Crawley added that he saw this relationship with the Post Brothers as a positive sign to move in the right direction for any future developments in the Richard Allen footprint which runs from Girard Avenue to Spring Garden Street and from Broad Street to 8th Street.

Neighborhood residents struggling with gentrification often find the transition challenging.  Those challenges, how to satisfy competing interests, developers and long-time residents, often end with mixed results and an even murkier vision moving forward.

“We can’t afford just to sit here and sit back.  I feel like we are boxed in here.  I like where I live and I can’t afford to move,” said Williams.