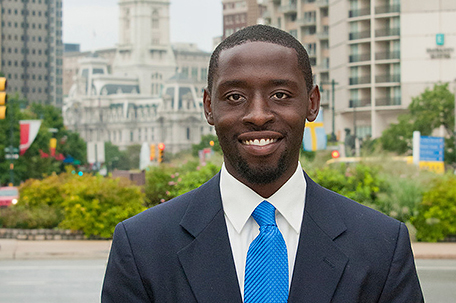 If he won, he’d be the youngest person ever elected to Philadelphia’s City Council.

“My age didn’t come up when I ran in 2011, and the only reason I think it may come up now is if people begin to see me as a viable candidate.” says Thomas.

In 2011, at the age of 26, Thomas decided to run for Philadelphia City Council at-large. He had recently left an administrative position at Sankofa Charter School.

He went in kind of blind.

“I really just had a surface understanding”, he said.

As he makes a second try for a seat in City Council, Thomas has learned enough to impress City Controller Alan Buckovitz, Kevin Boyle, and former State Rep. Tony Payton Jr., all of whom stood by him at his recent campaign announcement event.

While he didn’t win in 2011, he learned a lot about what NOT to do in a political campaign, Thomas said. Determined to get a different result next time around, he sought out mentors and friends to help him prepare for his next opportunity.

Thomas is focusing his campaign on forwarding the city’s youth agenda, which includes a permanent education funding formula and more extra-curricular activities for the city’s youth.

Additionally, Thomas is adamantly against stop and frisk laws in the city, and intends to fight until those laws are amended, something that in light of recent incidents between police and the Black community is necessary.

And while young, Thomas is not inexperienced. He’s been working on a micro level with youth throughout the city for the past 10 years. He is a self-proclaimed theoretical practitioner and champion for the youth in the city of Philadelphia.

In Jan 2015, he plans to unveil a more in-depth look at his platform, which includes innovative ideas to generate new income for the city of Philadelphia—without increasing taxes.

But Thomas’ candidacy and platform speaks to a much bigger issue for millennials throughout the city of Philadelphia, and this nation. Millennials all around the world have been expressing their alienation and departure from the status quo way of life for years now, from Occupy Wall Street to the current protests in support of Mike Brown and the outcry in Ferguson. Amidst increasing violence in our communities, and two high profile murders of young black men in the past two years, there is a sense of bewilderment among millennials, not just in Philadelphia. The rage against the political systems is evident in low voter turnout and education. Millennials not only don’t vote, they don’t care. Whether it is expressed or not, there should be worry about the future of our county if millennials are not engaged, and soon.

Could Isaiah Thomas be what this generation needs in Philadelphia’s council chambers? Could the voice that now sounds much like theirs be what causes millennials to reengage in the political system?

“I’m hoping that because I am a millennial, I energize other millennials to get involved. Not just voting in big elections, but voting every year, twice a year. I want to be a millennial thought leader”, Thomas said.

Although there is definitely no quick fix for our city’s issues, maybe Isaiah Thomas one of the sparks that lights the flame of this generation.

For more information about Isaiah Thomas you can visit  www.voteisaiahthomas2015.com.