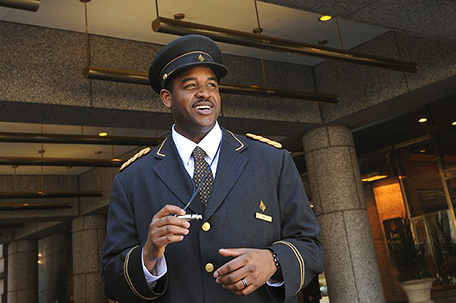 ABOVE PHOTO:  Doorman at the Four Seasons.  (Photo by R. Kennedy for Visit Philadelphia)

City Council on Wednesday announced the formation of a task force that will examine an anticipated slowdown of the hospitality and tourism industry in Philadelphia and make recommendations to revitalize the sector.

The Philadelphia Hospitality and Tourism Task Force will be co-chaired by Councilman At-Large Jim Kenney and Romona Riscoe Benson, manager of corporate relations at PECO and the former president and CEO of the Philadelphia African American Museum.

“This Task Force embodies an array of expertise and experience in the hospitality and tourism industry,” Council President Clarke said. “I thank all of the members for volunteering their service to our City, and I especially thank Councilman Kenney and Romona Riscoe Benson for their long history of championing this sector of Philadelphia’s economy. The Philadelphia Hospitality and Tourism Task Force will identify changes and efficiencies that will fast-track Philadelphia toward becoming a world-class destination for conventions, leisure travel and business.”

“Hospitality jobs and citywide conventions are at the very heart of Philadelphia’s economic recovery,” Task Force Co-Chair Kenney said. “City Council is determined to act to prevent a major downturn in convention and hotel room bookings between 2015 through 2017. For City leaders to sit on the sidelines and do nothing to prevent this from happening is unconscionable.”

“I am honored to join this important endeavor,” Task Force Co-Chair Benson said. “At PECO we know we are only as strong as the region we serve. Our region provides an abundance of arts and culture, educational and entertainment offerings for our residents and our visitors. I look forward to joining the Philadelphia Hospitality and Tourism Task Force and identifying creative ways to maximize Philadelphia’s potential as a meeting and leisure travel destination.”

Over the next six to 12 months, the Task Force will seek to identify the underlying causes for the decline in overall growth and sustainability in Philadelphia’s tourism economy, assess the current condition of the industry, and propose solutions for closing impending gaps in the citywide convention calendar.

The Task Force will release a final report within the next 12 months that includes recommendations for attracting new tourism business, retaining and growing recurring or annual business, and goals for programming, event planning and funding.