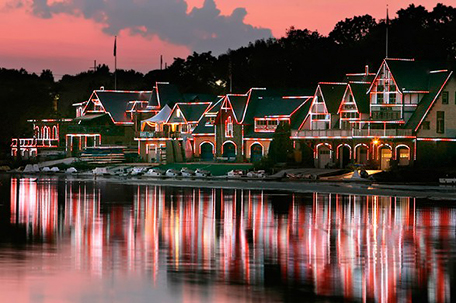 The City of Philadelphia announced plans to celebrate the diversity of religious and cultural holidays through public recognition and celebrations for Christmas, Hanukkah and Kwanzaa.

From December 16 until December 23, Boathouse Row will be red, green, silver and gold in honor of the Christmas holiday.  At the top of every hour, the lights will be programmed to display a 5-minute light show.

New this year, from December 24 until December 31, Boathouse Row will be white and blue in honor of the Hanukkah holiday. The design of the lights will turn the houses into one of the largest representations of the Menorah in the nation. For the first night of Hanukkah, one house in the middle of the Row will be illuminated in white lights, representing the shamash candle, and one house on the far right of the row will be illuminated in blue lights, representing the first candle, while the rest of the houses will be dark. Each successive evening at sundown one more house on Boathouse Row (representing that night’s candle) will turn blue, working from right to left in the Jewish tradition. By the eighth and final night of Hanukkah, all nine buildings representing the Menorah will be lit.

On December 29, the Mayor will host an event at the Fairmount Fish Ladder on MLK Drive for the 6th night of Hanukkah as the 6th house is illuminated at 6:00pm.  MLK Drive will be shut down to traffic between Eakins Oval and Sweet Briar Drive beginning around 5:00pm that evening so that attendees can walk to the gathering spot across from Boathouse Row.  All Philadelphians are encouraged to come out to celebrate the Festival of Lights.

The City will also recognize Kwanzaa from December 26 through January 1.   This year marks the 50th Anniversary of the holiday, based on the “first fruits” agricultural celebrations of Africa which were times of harvest, ingatherings, reverence, commemoration, re-commitment, and celebration. While not a religious holiday, Kwanzaa is celebrated by African Americans and Africans in the diaspora of all religious affiliations and focuses on the cultural, ethical, and spiritual visions and values of African culture.  During a City Hall observance scheduled for December 27, The Mayor will accept a kinara, a candle holder for seven candles that represent the Kwanzaa daily principles, and Unity Cup from the Kwanzaa Collective, a local non-profit, on behalf of the City.

All events are free and will be open to the public.

Celebrate the holidays with Historic Germantown

Longwood Gardens Lights Up the Holidays