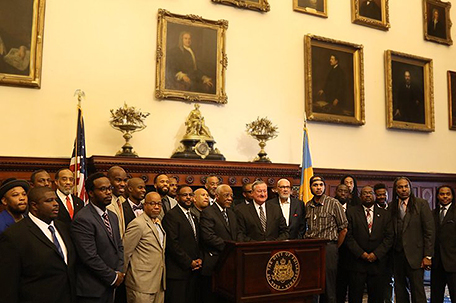 On Tuesday, Mayor Jim Kenney, the Office of Public Engagement and the Office of Black Male Engagement announced the establishment of the Mayor’s Commission of African American Males (MCAAM) for the City of Philadelphia.  MCAAM will study the varying and diverse conditions of Black men in Philadelphia and provide yearly reports of recommendations to the Mayor on how to affect positive outcomes for Black men and boys.

“The work of MCAAM will be driven by the urgency to create policy that can improve the lives of African American men in Philadelphia, but also be a way for their stories to be shared and amplified,” Ahmad said.

“While this commission is comprised of African American men, the diversity of their lives – age, sexual orientation, careers, education –  is a strength and an asset to the city,” Drummond said.

The MCAAM is comprised of 28 individuals appointed by the Mayor and includes representatives of government, business, education, labor, health and civic organizations. MCAAM is constituted as a permanent commission by way of voter referendum on April 2016.

The Mayor’s Office of Black Male Engagement (OBME) operates as the only office of its kind in the United States of America. OBME works to align and focus resources and initiates towards the specific goal of reducing economic/ social disparities and improving outcomes for Black men and boys, as well as the communities in which they live. The purpose of OBME is to serve African American, Latino, Asian, immigrant and other populations of men and boys in the City of Philadelphia. In February of 2016, Mayor James F. Kenney appointed Jack Drummond to lead the office. OBME provides and coordinates advocacy services for men and boys of color and in other vulnerable populations

MCAAM Commissioners are listed below:

Shaun Harper, Founder, Center for the Study of Race and Equity in Education

Isaiah Thomas, Director of Community Affairs for the City’s Controller