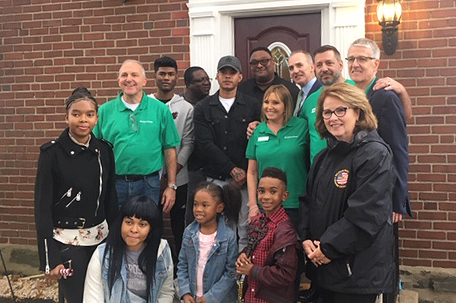 As part of its ongoing commitment to give back to the communities it serves, Citizens Bank has again partnered with the Military Warriors Support Foundation (MWSF) to donate a newly renovated, mortgage-free house to a deserving veteran and his family.

The Aldan, Pennsylvania home – renovated by Citizens Bank colleagues and donated by the bank – was presented today to Private First Class Michael Lowe, who honorably served his country as a combat engineer in Iraq and Korea.

Lowe was inspired to join the Army in the aftermath of the terrorist attacks on New York City on September 11, 2001. He was born in Georgetown, Guyana and raised in Brooklyn, New York. He entered the Army in March 2003 and served until 2006 as a Private First Class Combat Engineer serving in Korea and Iraq. Before retiring from the Army for medical reasons, Lowe received several awards and commendations for his service including the Purple Heart.

“We are proud to honor Michael’s brave service by providing him with a home that has been refurbished with pride and great care,” said Brad Conner, vice chairman and head of consumer banking for Citizens Bank. “At Citizens Bank, our colleagues are committed to supporting the communities where we live and work, and we are truly excited to have helped renovate this home for Michael.”

“It is a privilege and an honor to award a mortgage-free home to one of our nation’s combat wounded heroes.” said Kathy Feeney, executive advisor of housing initiatives for the Military Warriors Support Foundation. “This amazing opportunity doesn’t get to happen by itself. Together, with donors like Citizens Bank, we are given the opportunity to serve those who have served for us.” 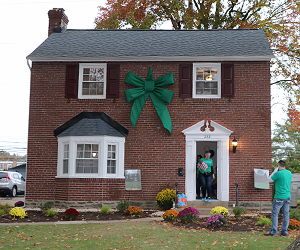 At a ceremony last week, Citizens colleagues lined the street to welcome Michael and his family to their new home. Representatives from Citizens Bank and the Military Warriors Support Foundation presented the keys to Michael and led him on a tour of his new home.

More than 100 Citizens Bank colleagues have donated their time volunteering on various projects to improve the house. Citizens Bank colleagues donated their time and talents, as well as items for the home (television, snow blower, gas grill, gardening tools, small kitchen appliances and silverware, living room, family room, and bedroom furniture) and gift cards for various stores in the area.

Additionally, GIANT Food Stores has donated groceries, personal care and home supplies to fill the family’s kitchen and cupboards. The company is also providing the family with free groceries for the year, valued at $2,500 and, as the official grocer of the Philadelphia Phillies will also host Lowe and his family at a 2019 Phillies game in Citizens Bank Park.

This donation represents a long-term commitment the bank has made to give back to the communities it serves through its Citizens Helping Citizens initiative. Citizens Helping Citizens Provide Shelter is one component of this program. During the past four years, Citizens Bank partnered with the Military Warriors Support Foundation to donate homes to military families in New York, Pennsylvania, Rhode Island and Michigan.

Since 2010, Military Warriors Support Foundation has awarded over 800 mortgage-free homes through their Homes4WoundedHeroes program, and has assisted combat wounded veterans and their families in paying off over $20 million in debt through mentorship.