Chill Moody brings ‘nicethings’ to the world of Craft Beer 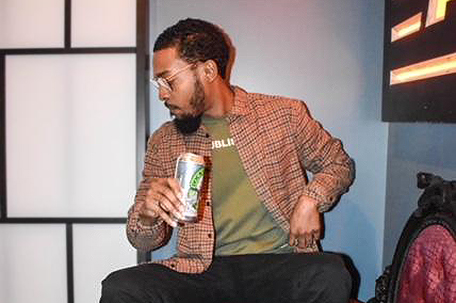 Chill Moody has been a fixture in his Philadelphia hometown for quite some time. He is known for his contribution to hip-hop music, his lifestyle brand, and for his constant efforts to uplift and give back to the community. Those who know Moody are also familiar with his brand “nicethings”—with which he has become synonymous. The phrase “nicethings” began on his block, he said.

“Originally, nicethings came from my cousin and his friends growing up,” Moody said. “When I was about 10 years old, that’s all they use to say. Everything was “nicethings” but it was always about glorifying and celebrating what we had. It was always about supporting for the family, or I’m going to buy lunch for the block today, or I have a new TransPass so I can get to work this week. It also became a slang where we’d just throw “nicethings” on the end of everything.”

“It really became a brand when hip-hop picked up for me,” he continued. “My idea was you might love this music, you might hate it, but I don’t want that to be indicative of supporting any of my other endeavors. So let me find a way to separate me from that but still be apart of it because it’s my company. Let me find a brand to make all the other things I’m doing work under the same umbrella.”

Moody’s latest “nicethings” include his own craft beer, “nicethings IPA.” It’s a collaboration with the Dock Street Brewery, which is located in the neighborhood he grew up in.

It was a collaboration that almost didn’t happen, Moody said.

“The same block and neighborhood where the phrase “nicethings” came from, is where Dock Street Brewery is,” he said. “I met the owner one day and explained to her that I appreciated what they were doing for the community. They came in and didn’t try to change the area, they added to it. I told the owner that I wanted to make a beer with them and the owner look[ed] me in the eye like ‘who are you?’ Moody said with a laugh.

“So I told her what I did and it turns out we had a mutual friend in the business who vouched for me and my character,” Moody continued. “We got started on it, but I didn’t want to just put my name and face on the beer. I really wanted to make a beer with them. For four months, I was just learning everything I could… basically interning down there about 2 to 3 days a week. I learned about the process, drinking a lot of beer in the process, and came up with a good pallet for flavor profiles. So now we have nicethings IPA.”

For those of you who may be wondering, IPA stands for Indian Pale Ale, a classification for beer. Nicethings IPA has a 6.4 percent ABV (alcohol by volume), which means it packs a punch. The beer has a golden hue, an aromatic blend of citrus and floral hops, and is infused with pineapple.

One thing is clear. In addition to creating a delicious beer, Moody aims to bring a new perspective on the culture of beer to his community.

“I’m trying to bring something else to drinking,” he said. “I’m not drinking to get drunk and I’m not promoting drinking to get drunk. I’m promoting the enjoyability of the beer. You have a beer, enjoy your beer, and converse with a beer. I started seeing how other cultures treated beers. I thought, there’s another side to this… let me take what they’re doing over there and bring it to my community.”

Nicethings IPA is available at Dock Street (705 South 50th Street), Garage Fishtown (100 East Girard Avenue), Garage Passyunk (1231 E. Passyunk Avenue) The Foodery (837 N. 2nd Street) and many other locations throughout Philadelphia. It’s also available for distribution through Origlio and is likely to be picked up by several other locations across the Tri-State area. Moody’s goal is to take nicethings national and then worldwide, eventually opening a Nicethings Brewpub, he said.

Moody began professionally rapping in 2009. His undeniable presence on the stage led him to performances at Union Transfer, several of the legendary Roots Picnics, and sold-out crowds at arenas such as the TLA. He is recognized as a Philadelphia Music Ambassador. Although Moody’s love for hip-hop and gift for rapping began at an early age, he always had his eye on much larger goals.

“I always saw myself working behind the scenes in management, A&R, production… just using my creativity to its best ability,” Moody said. “I always wanted to work in the industry. Once the rap picked up and people started enjoying that, it was decided. That’s what I was going to use to get my foot in the door so I can do everything elseI thought if I’m doing all these things, one of them has to take the forefront or take the lead to then lift the rest of them up. It just so happened that it was rap first… but it was never the plan to be only a great rapper, it was like I’m going to be everything.”

Making all things work together for the greater good was extremely successful for Moody. Nicethings now includes merchandise in the form of t-shirts, sweatshirts, hoodies, jackets, watches, water, the record label nicethingsMUSIC, management and marketing, and now a beer.

Additionally, Chill Moody in partnership with Big Brothers Big Sisters and Delaware Valley Honda just launched a campaign called “Power Your Dreams”. Moody will be joining Rodney McCleod of the Philadelphia Eagles, and three-time Olympic gold-medal soccer player Heather Mitts in encouraging people to follow their dreams. Moody ended 2017 with a bang with a “It’s Been a Nice Year” celebration at Milkboy on Thursday, December 28th.

This year has been full of nicethings, here’s to “Nicethings” following us all into 2018… cheers! Follow and support Chill Moody’s journey online @chillmoody and on his website www.chillmoody.com.

Brewing up fresh ideas in the kitchen: How to incorporate craft beer into your cooking