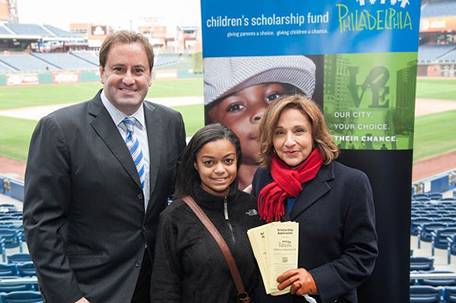 With hundreds of families and students, school representatives, CSFP supporters, The Phillie Phanatic and Wawa’s Wally Goose, Children’s Scholarship Fund Philadelphia (CSFP) opened its scholarship application season for the 2014-2015 school year, and announced that as part of its Campaign for 10,000 Children, it will – for the third consecutive year – offer 2,000 new, four-year scholarships for K-8th grade students from low-income Philadelphia families.

CSFP was joined by Chris Gheysens, CEO of Wawa at Citizens Bank Park, to kick off the launch. Wawa has been a long-time educational partner of CSFP, and has positively changed the lives of thousands of Philadelphia children and families.

“Wawa is proud of its support of CSFP and the transformational opportunities that these new scholarships will present for children,” said Gheysens. Since opening our doors in 1964, we’ve been committed to supporting important causes in the communities we serve. As we approach our 50th anniversary in retail, we are particularly excited to celebrate the availability of 2,000 new four-year need-based scholarships for children.”

Children’s Scholarship Fund Philadelphia currently has about 4,500 children in K-8th grade in more than 185 area tuition-based schools, who are receiving an average of $1,600 per child, per year.

Now in its 13th year, CSFP is the largest K-8th grade scholarship organization serving low-income families in Philadelphia and it stands alone in its focus on families and children and providing them with the financial access to safe, quality tuition-based schools.

CSFP scholarships are need-based and awarded by random lottery. Applications are available online at www.csfphiladelphia.org, as well as at all branches of The Free Library of Philadelphia, YMCA’s, Police Athletic League and Philadelphia Park and Recreation Centers. Completed applications must be received by CSFP no later than March 1, 2014.

Only the first 10,000 applications received will be processed and entered into the lottery. Scholarship award selections (by lottery) will be made in mid-March.