Childhood’s End: A reflection on the 50th anniversary of MLK, Jr.’s assassination 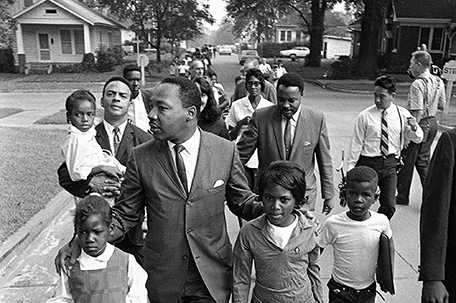 The Rev. Dr. Martin Luther King, Jr. was dead. The hopes of so many that centered on this iconic leader were murdered that day as well. The resulting physical chaos that was manifest through rioting in wake of this assassination was mirrored in the existential crisis that resulted amongst his followers, colleagues and close friends.

Contemporaries have often recalled an intense period of hopelessness that included relentless self-examination, confusion, anger and resignation. It typified every human emotion and reaction in an endless loop. It also was not knowing where to turn, how to proceed or whether to proceed.

Little did they know that this seminal tragedy was only the first of many pivotal events that year that seemed to bend even the world’s axis. Little did anyone know.

However, at the time he was struck down, King had been marginalized. Many had turned away after that fateful 1967 day in New York City exactly one year earlier when he publicly came out against the Vietnam War.

King always knew that his death would be violent. Attempts had already been made on his life several times in the decade leading up to April 4, 1968. He made several allusions to it the night before during his valedictorian speech to the universe the night before, often referred to as the “Mountaintop Speech.”

By the time 1968 rolled around, my father — a civil rights activist in the community — had already been laboring under every setback that had occurred prior to April 4, 1968. Each act of wanton violence and bloodshed — the assassinations of President Kennedy, Medgar Evers and Malcolm X, the Birmingham church bombing, the murders of James Chaney, Andrew Goodman and Michael Schwerner in Mississippi during Freedom Summer — seemed to deflate his spirit more and more. 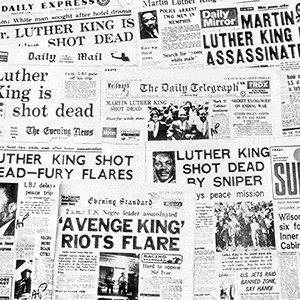 This is how the morning newspapers in London headlined the assassination of Dr. Martin Luther King, April 5, 1968. (AP Photo)

The night of King’s murder, whatever remaining strength Dad had left to fight seemed to bleed out onto the battlefield of the universe.

And although my father would continue supporting and working hard for other causes he cared about for the remainder of his life, he never really regained the same focus after that event, the same drive.

He sat silently with my mother that evening. There was no sobbing, no drama — just utter emptiness and despair. A single tear rolled down my mother’s cheek. So much hope, then so much finality. They were all at sea, rudderless.

Others lashed out in defiance. Indeed, King had once referred to riots as the language of the unheard. They had to do something — anything. But after the storm, a crackling silence among the embers was the only sound heard. A cloud of nihilism formed, following many people around as they tried to get back to some sense of normalcy — a normalcy they now knew was an illusion.

The events of that fateful year unfolded like a nightmare. The bad guys seemed to be winning. I was only a 10-year-old child at the time, but fully aware that the rug had seemingly been pulled out from under modern society as I knew it, even though I was not aware of what that was specifically.

I had already witnessed so much in my young life, both in person and on television. The nonstop coverage of the JFK assassination and aftermath, including the murder of Lee Harvey Oswald in real time. The protests on the boardwalk in Atlantic City during the 1964 Democratic National Convention.

But this event was different — a nonviolent man who was making a difference.  The adults had clearly lost control of the plot. I felt vulnerable and exposed.

I couldn’t really trust adults alone to interpret what was happening or how to respond to it anymore, I decided. If I wanted to understand, I was going to have to gather the facts and discern them for myself.

My childhood — and that of thousands of other children — ended in earnest on April 4, 1968.

I remember being saddened but not surprised when my mother woke me up to tell me two months later that Robert Kennedy had also been assassinated.

“Was anyone else injured?” I asked calmly, with a level of maturity and stoicism that unnerved her, she would later tell me. After she gave me a full rundown of the evening’s events, I turned over and went back to sleep.

I would play the radio constantly because the music helped me not to think about the horror of it all. I read the paper and watched the evening news with Dad.

I played with my toys, rode my bike, and generally tried to just be a kid again, but I suffered from many nightmares and to some extent other manifestations of PTSD , as did many other children that year, I would imagine.

But some good came from it. I learned how to ask questions when I had them, a huge accomplishment for a painfully shy little girl.  And to follow up with research if I wasn’t satisfied with verbal answers — spending hours at the library, the bookstore or perusing the hundreds of books my parents owned. I also learned how to maintain a healthy skepticism without sinking into darkness and cynicism.

The entire year of 1968 also taught me that even in chaos, there can be growth, happiness, recovery and hope, but that I had a part to play in it.

Sometimes I wonder if my generation was stunned into complacency by the sheer magnitude of upheaval that year, because in so many ways, we lost the plot. We took the hard won gains that our elders taught us for granted.

As the Movement became a footnote in history after the ravages of the King assassination and COINTELPRO, a malevolent wave of narcissism and crass materialism rose up in its place, providing fertile ground for the crack epidemic and the violence and mayhem that accompanied it.

Many of the remaining middle class African- Americans families moved out of the communities most affected for good at that point, leaving people behind that they might have marched with in solidarity even 10 years earlier to fend for themselves.

This was something that the late Alabama born civil rights activist Virginia Durr — who along with her husband, lawyer Clifford Durr, accompanied E. D. Nixon to bail Rosa Parks out of jail after her historic 1955 arrest – once told me was one of the greatest challenges facing African-Americans as they approached the millennium, due of the sheer loss of collective wealth and momentum.

And as stories about King’s feet of clay have unfolded over the years, there are those who seem to revel in his flawed humanity. Others deify him. The truth lies somewhere in between, because half a century later, we not only celebrate King’s best qualities, but are realistic about the work left undone — and that is being undone in recent years.

So here we stand, 50 years later. The nation is again at a crossroads. Everyone — not just the inspiring young leaders that are coming into their own today — has a part to play moving forward.