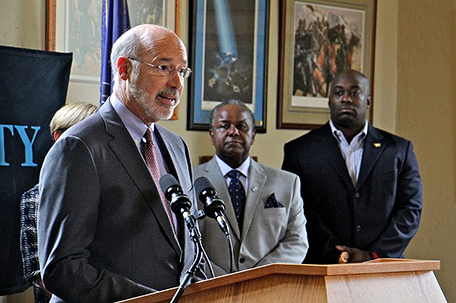 ABOVE PHOTO:  Pennsylvania Gov. Tom Wolf announces the formation of the Institute for the Contemporary African American Experience at Cheyney University. He is joined by (from left) Cheyney University President Aaron Walton and Charles S. Smith, Chairman of the Epcot Crenshaw Corporation, a partner in the Institute. (Emma Lee/WHYY)

After facing several years of falling enrollment and financial instability, Cheyney University is looking to remake itself by playing to its strengths.

On Tuesday, Carnegie Hall on Cheyney’s campus was filled with students, alumni, board members and others celebrating the launch of two new institutes that are part of the school’s redesign.

One institute will focus on issues of diversity and access, and the other on STEM (science, technology, engineering and math).

The Institute for the Contemporary African American Experience is intended to build upon the school’s legacy as the nation’s oldest historically Black university by focusing on issues of race, ethnicity and diversity.

The Crenshaw Institute for Applied Science and Technology will look at food, energy and water security.

Both institutes will enable faculty and students to be involved in research projects that affect local communities, have access to internships, and train in their chosen fields.

“Programs like this new initiative and the training Cheyney students will receive really play to those two goals because we need to make sure that everybody in Pennsylvania, everybody, gets a good education and a good start in their career,” said Gov. Tom Wolf.

“This is the perfect location for this new initiative that brings together the oldest historically Black university in the United States with Thomas Jefferson University, one of the oldest medical colleges in the United States,” Wolf said. “This is exactly the kind of STEM learning and training that Pennsylvania needs to create a well-educated, skilled workforce that can drive our economy and our entire Commonwealth forward.”

Stephen Klasko, CEO of Thomas Jefferson University and its hospital system Jefferson Health, says students will research how to lessen health disparities among African-Americans and other minority communities.

“Wouldn’t it be great if Philadelphia with all of its great academic entities doesn’t have the greatest discrepancy in life expectancy and the kind of health inequities we have and if we could work together to have that happen?” he said.

The two universities will also provide opportunities for Cheyney students to pursue graduate degrees at Jefferson in healthcare fields.

“Our vision is that Cheyney University will continue to be an institution that strives for excellence in academics, character development and social responsibility. Today is but one more step toward the realization of that vision,” said Cheyney president Aaron Walton.

Walton says the national Starbucks Foundation will collaborate with the institute on a future research project around race and access to economic opportunities in the Philadelphia region. A Philadelphia Starbucks store gained national attention because a manager called police on two Black men who had not ordered anything while waiting for a business meeting. Their arrest led to national outrage and boycotts as well as anti-racial bias training by the corporation.

Cheyney is one of 14 universities that make up the Pennsylvania State System Higher Education. The creation of the Institute for the Contemporary African American Experience was recommended by the Cheyney University Task Force. The task force was formed a year ago by the state system’s board of Governors to help Cheyney, which was at risk of losing its accreditation at the time.

State system board chair Cynthia Shapira says a year ago the idea was purely aspirational then, but it’s now a reality

“It will provide students exciting new educational and enrichment opportunities helping to ensure their success while both enrolled at Cheyney and beyond,” said Shapira.

The Crenshaw Institute’s partner, Epcot Crenshaw, is a West Chester-based research and development firm that focuses on industrial sustainability and environmental projects.

Charles Smith, the company’s CEO, says they’ve been working with Cheyney for nearly a decade helping the natural sciences and aquaponics research programs.

“Everyone sees the floods and the fires, which are acute problems, but they don’t clearly see that gradual action of our toxicity and our watershed, which is a chronic problem,” said Smith, a scientist.

Pennsylvania’s agriculture and food processing industries contribute a lot of pollution to the state’s watersheds, he said.

“Eighty percent of our water is impaired by toxic materials and we need to expedite meeting our goals for a cleaner watershed,” Smith said. “So we’re asking ourselves today how much time do we have before we kill the Chesapeake Bay completely?”

At Cheyney’s aquaponics lab, they are working on sustainable models for raising fish. Fresh water is pumped to tilapia, while their waste is pumped to basil plants that in turn feed off of that. The lab is a public/private partnership with Herban Farms that sells the basil to grocery chains.

Epcot Crenshaw plans to move the company’s labs to the 275 acres of Cheyney’s campus to support the new initiative.