Chef Larry: There’s always a story within the glory 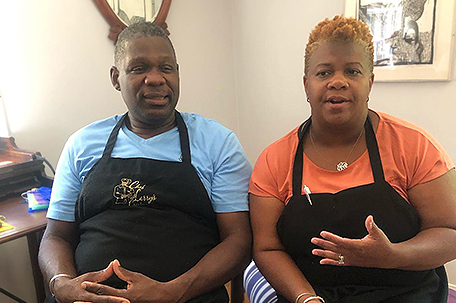 ABOVE PHOTO: Executive chef Lawrence Washington and his wife Laraine Henry as they speak of their business.

When I was first introduced to Executive chef Lawrence Washington and his wife Laraine Henry, he immediately struck me as a quiet and patient man who was observant of those in his sphere and quite happy with not being the center of attention.

I sat with him and his wife to discuss an author’s lunch where they were highlighted as personal chefs for the day who had also authored a book of their own.

I was soon to discover these amazing people had quite a story — one that the world needed to hear.

“Executive Chef Larry”, as he is affectionately called, was born in Philadelphia and Laraine hails from the island of Grenada.

Laraine is filled with energy and a fierce protection  of her quieter husband; so it was with her gentle prodding that Executive chef Larry began to unfold a story that went beyond his being the resident chef at the “Make Literacy Dope” luncheon on Martha’s Vineyard.

Washington began cooking 32 years ago out of necessity as part of a family of 12 siblings, and in his words, has been a chef for 20-plus years.

He honed his skills preparing family meals as a child out of the need to be certain that the food was always tasty, since they could not afford to waste a morsel.

Washington became a chef at a high-end hotel chain after being hired part time in the kitchen of a French restaurant while he was in school for an engineering program. He needed more money for books and began washing pots, which was the grittiest job to have there.

While washing, he would show up early, leave late, ask the guys in the kitchen what certain things were and then committed it all to memory.

When the man who handled all the salads called out sick one day, Washington was asked to be a filler to help the other staff, as it was a busy night. He was not expected to do anything else.

He covered over 100 plates on his own and no one had to help him.

They were stunned. The head chef called Washington into his office the next day, asked him where he trained and what cooking school he attended, because he was better than the one who was professionally trained in school.

Was the head chef ever shocked to learn that Washington lived in the “hood,” was never trained anywhere but his momma’s kitchen,  understood all the orders that were given in French and about how to use the knives with skill, because he learned while he was washing those pots every day!

Did I mention he was all of 20 years old at the time?

Instead of being fired, this young Black man was offered the job, and the one who called out sick was let go. The head chef told Washington that he worked better than the French chefs who trained in France at Le Cordon Bleu.

“Chef Larry” was born that day.

Washington honed his craft by being observant, working hard, having excellent follow through, and by teaching himself to be an excellent French chef, because nothing was translated in English back  in the early 80s.

When asked how he ended up in the position where he is today, where he has serious name recognition and is in demand, he spoke of five rules he lives by:

4. Be aware of everything around you.

Larry and Laraine then went on to recount a time when they had a restaurant during the recession, and as people began losing jobs and were not able to support their business, the ricocheting effect was devastating on their end. They quietly kept the restaurant going to keep their people employed, even as their utilities at home was being shut off, they lost their car and had to take public transportation to and from the business. They fed 150 people at Thanksgiving, and would go home some days having to figure out what they would eat. In the end, they lost the business and their home.

They learned many lessons along the way from then until now, but abiding faith — and the love they have for people and each other — has put them on a solid foundation where they continue to build and grow, all while steeped in gratitude for it all.

When you see them catering events, know that they are filled with integrity, and that your meals were created with excellence and a love for their craft.

Turn a gourmet kitchen into a chef’s studio; kitchen design tips from a professional chef