Charles L. Blockson to be awarded Prestigious Philadelphia Award on May 25 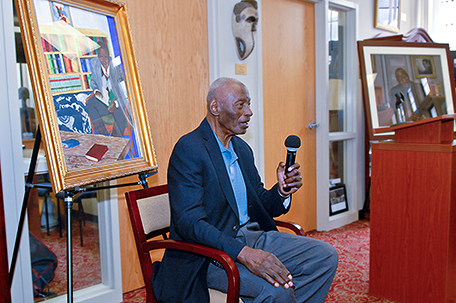 ABOVE PHOTO:  Charles L. Blockson addresses crowds in front of one of his unveiled portraits. (Photo: Bill Z. Foster)

Portrait unveiling presented at the Charles L. Blockson Afro-American Collection on May 10

Charles L. Blockson, a prominent African American historian, scholar, and author with deep roots in the Philadelphia region, has been awarded the coveted Philadelphia Award for 2016. Blockson was selected for this annual honor by the Board of Trustees of the Philadelphia Award in recognition of his lifelong, personal mission to document the African American history of Philadelphia and around the country for future generations. The award will be presented at a ceremony on May 25 at Temple University, which houses the Blockson Collection.  On May 10, 2017 an unveiling of portraits done of Blockson were displayed and celebrated at the Charles L. Blockson Afro-American Collection  with well-wishers who included choreographer/actress/director Debbie Allen and her daughter Vivian Nixon, and journalist Cody Anderson.

“I am incredibly humbled by this recognition, and thank the trustees for recognizing the value of preserving the record of people of African descent,” said Blockson. “This award is particularly meaningful because it caps a lifetime of dedication to collecting, conversing, reading, and traveling the world in pursuit of uncovering the history of our past in order to build a better future. It has been a long journey, from my days as a track and field athlete at Norristown High School, to the football field at Penn State’s Beaver Stadium, and lecturing at universities around the globe – and I am honored to know that my work has made a mark on the community right here in Philadelphia.”

Blockson’s passion for history and books began at the age of nine, and blossomed into his amassing one of the largest private collections in the world related to people of African descent. According to a personal account, Blockson was particularly impacted by a history lesson in fourth grade, when his teacher – a White woman – asserted that “Negroes had no history” and were born to serve White people. He went home that day and recounted the story to his parents, Charles and Annie Blockson, who assured him that “Negroes have a strong history” and began exposing him to lessons on prominent African American men and women.

Blockson’s experience as a young man marked the start of a lifelong journey of unearthing, collecting, and preserving the history, culture, and contributions of African descendants. 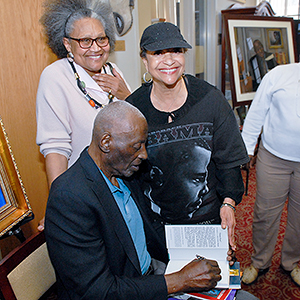 Dr. Blockson signs one of his books for long time friend, choreographer Debbie Allen, who attended the event while in Philadelphia. (Photo: Bill Z. Foster)

Over the years, his world travels inspired him to write books on the topic, making him one of the foremost experts on the Underground Railroad and putting him in the company of leading African American figures like Paul Robeson, Marian Anderson, and Rosa Parks.

“For as long as I can remember, Charlie – my best friend for 69 years – has been my hero,” said Robert J. Butera, a personal friend of Blockson who will speak at the Philadelphia Award ceremony. “It is particularly remarkable to witness the recognition of an average person and self-taught historian from Norristown, Pa., who has done extraordinary things to raise our awareness and knowledge of an entire culture and race. Charlie has more information on African- American history stored in his brain than any other living person.

He is a treasure and I join his friends, family, colleagues, and our community in celebrating his achievements that have made this world a better place.”

In 1984, Blockson donated his personal collection of rare publications and artifacts related to African- American history and culture to Temple University. The Charles L. Blockson Afro-American Collection, one of the nation’s leading research facilities for the study of the history and culture of people of African descent, now contains more than 500,000 books, documents, and photographs.

He is a co-founder of the African American Museum in Philadelphia, and has contributed books and other historical items to the Charles L. Blockson Collection of African-Americana and the African Diaspora at the Pennsylvania State University and the National Museum of African American History and Culture (NAAMHC) at the Smithsonian Institution. A recent donation to NAAMHC includes 39 of Harriet Tubman’s personal items – highlighted by the shawl that Queen Victoria presented to Tubman, the “crowing jewel” of Blockson’s collection.

Additionally, Blockson spearheaded efforts to have a State Historical Marker placed along Penn’s Landing, which commemorates the lives of enslaved Africans brought to local ports during the Pennsylvania slave trade era. In 2016, Blockson contributed his collection of photographs by Philadelphia photographer John Mosley for a curated exhibition at the Woodmere Museum. 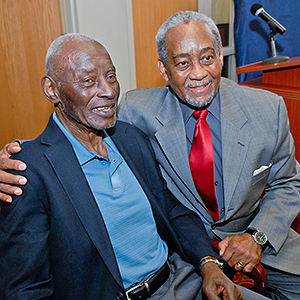 “Charles is one of those rare souls who has put all of his energies into understanding and celebrating every triumph and travail of African American history, so that future generations of fourth graders may never be left wondering where they came from,” said David L. Cohen, Chair of the Board of Trustees of the Philadelphia Award and Senior Executive Vice President and Chief Diversity Officer of Comcast Corporation. “His life work truly embodies the mission of the Philadelphia Award, and fellow members of our community are fortunate to have access to his impressive collection right here at Temple University.”

In addition, a 1984 article he wrote for National Geographic, “Escape from Slavery: Underground Railroad,” was the first cover story pertaining to African- American people, and is one the most popular stories in the history of the magazine. As a result, the U.S. State Department commissioned him to lecture on the subject in the Caribbean Islands and South America.

Blockson is a 1956 graduate of the Pennsylvania State University, and has three honorary doctorate degrees from Lincoln University, Holy Family University, and Villanova University. He retired from Temple in 2006 and continues to serve as Curator Emeritus of the university’s Charles L. Blockson Afro-American Collection. He resides in Gwynedd, Pennsylvania, and has a daughter, Noelle P. Blockson.