Chaka Fattah… In his own words 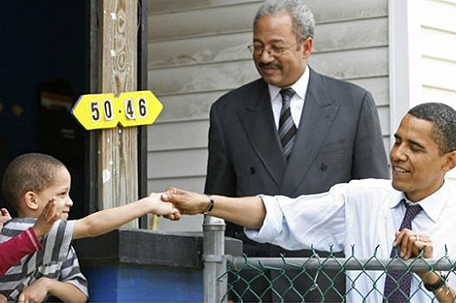 When African- American elected officials leave public office, they often want to be remembered as the one who “walked with kings and yet not lose the common touch.” Yet some, because of a blemish, a scandal or a conviction, are relegated to a one-sided, less than stellar legacy. This might certainly the case of former 2nd District Congressman Chaka Fattah.

Since making headlines after being charged with corruption and racketeering, Fattah is concerned that many are forgetting about his more than 30 years as a state and federal legislator. He is quick to point out that before this court case he stuck his neck out for his former constituents in doing good, and as Democratic appropriations chair in Congress he brought many resources to the city. 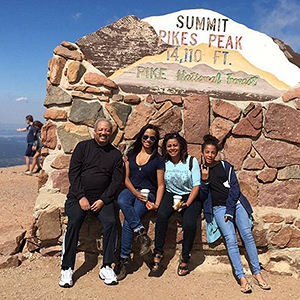 The Fattah family, the Congressman with wife Renee’ Chenault Fattah and their two daughters.

Yes, he even walked among those in high places, from riding on Air Force One beside President Barack Obama, to having a private audience with former South African president Nelson Mandela. Nor do realize that even amid the controversy, he is putting things in place to continue building on this legacy, despite whatever may happen.  This includes the Fattah Neuroscience Initiative.

“By the time everyone reads this, everyone will know whether or not I have to go to prison or not during my appeal,” Fattah said. “I prefer to look ahead. I am putting things in place, despite what may or may not happen.”

Fattah was willing to sit down with the Philadelphia Sunday SUN on the eve of his Jan. 12th, court date to discuss his contributions to Philadelphia’s African-American community and to the City of Philadelphia. Rather than discuss the details of the charges or wallow in the change of perception one has of him, he dusted himself off and is willing to move forward.

Among the things Fattah is most proud of is the Fattah Neuroscience Initiative that Obama signed into law in November 2011. This established the first federal inter-agency collaborative on neuroscience. His neuroscience consulting group will continue regardless of his personal fate, he said. 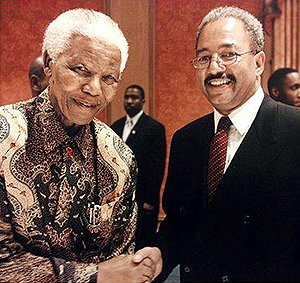 In fact, Fattah is now embracing an audacious spirit to insure this continues. That is why the Fattah Neuroscience Global Advisors, a consulting firm, will continue into the distant future. He is determined to allow that legacy to continue going, whether or not he serves time in prison. “There is still much research that needs to be done in neuroscience,” Fattah said.

The former lawmaker said that this helped propel the research on many neuroscience projects. He singled out research on brain diseases, autism, Alzheimer’s, mental health issues ranging from bipolar to schizophrenia, and those with brain injuries caused by sports or other accidents.

Despite the legislative victories Fattah, 60, has done soul searching about what has happened since the indictments that he is still appealing. This is especially so as he may have to turn himself in on before Thursday, Jan. 26.

Yet as of press time Fattah was still hoping for Plan B — a pardon from President Obama. Fattah was the first African- American elected official to support then Sen. Obama when he decided to run for the presidency as far back as 2006. He is also credited with being among those who encouraged the then- Illinois state lawmaker to run for the seat that made Obama the only African- American senator at the time. He received support from the Obama administration for many of his legislative initiatives.

In the presidential pardon request letter dated Sunday, Jan. 1 attorney Lanny Davis, who served as special counsel to former President Bill Clinton, and the Rev. Dr. Therman E. Evans, a New Jersey based pastor, physician and professor made the plea.

Yet Fattah’s future did not look bright by mid-January. Not only had he not heard back from the President Obama, but Judge Harvey Bartle issued a one-page ruling in the Third Circuit Court of Appeals on Thursday, Jan. 12 that denied him bail during his appeal without explanation. Fattah is also appealing this decision. 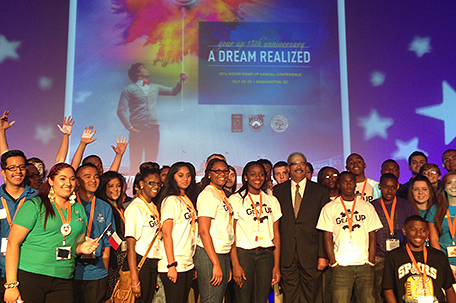 The GEAR UP youths and the Congressman.
(Photos courtesy: Chaka Fattah)

So, what are some of the milestones that Fattah feels that the public should focus on rather than charges he is appealing?  He is more than willing to share a comprehensive list. Fattah is the architect of the Gaining Early Awareness and Readiness for Undergraduate Programs (GEAR UP), the nation’s largest college readiness program serving 12 million students in 19 states, Puerto Rico, Washington, D.C. and U. S. and its territories. Among those who are benefitting from this program is 15-year old Terrell Bullock-Wallington of Mount Airy, who entered the program while a student at the old Morris E. Leeds Middle School. Now in high school, he is considering a STEM career.

“I really recommend that all parents sign up their children for this program,” said Robert Wallington, Terrell’s father. “The STEM model is great. It gives them to tools necessary to enhance their skills in a global world, whether they decide to go to college or vocational school.”

Grandmother Essie Shields of Roxborough is a staunch advocate of GEAR UP. She said her grandson, William Frederick, and granddaughter Amanda Frederick used GEAR UP services placing them on the college track. “I cannot thank Congressman Fattah enough for providing this program that has helped so many students,” Shields said.

Congressman Chaka Fattah is quick to pull out articles and documents showing the many things he achieved until he left Congress as the Democratic Appropriations Chairman. Additionally, Fattah played a key role in the new Equity and Excellence Commission on Education,

He was also the chief sponsor of the American Opportunity Tax Credit Act that gives tax credits to college students or their parents.

He was also a staunch supporter of the American Dream Accounts Act, and many other pieces of legislation that support small business owners, families, and employment.

Fattah said he visiting with young people in his district even while in the State senate speaking to auditoriums full of students at venue like the Morris E. Leeds Middle School in Mount Airy, or classroom visits to Roxborough High School in northwest Philadelphia and St. Joseph’s University in Wynnefield.

Moreover, Fattah is a family man. He is married to former attorney and news anchor Renee Chenault-Fattah and has four children. He has two older children from a previous marriage, his only son, Chaka “Chip” Fattah, Jr. and daughter, Fran Fattah, who is an attorney. With his current wife he has two younger daughters, who are still in high school.

Fattah, was born the son of gang prevention advocates David and Falaka Fattah, founders of the House of Umoja in West Philadelphia. His mother and stepfather provided a haven for wayward young men, some of whom they brought to live in their family home. In fact, his family is one of the primary motivating forces for his interest in social justice issues and later in neuroscience.

He said that he personally knows those who were impacted by Alzheimer’s. “During my time in Congress there has been $210 billion put into neuroscience with $900 million for Alzheimer’s research. People have already been helped by this,” Fattah said.

Chaka Fattah still has faith in the system in the belief that justice will prevail for him; the kind of faith he expressed at the ecumenical “Prayer for a Safer City” breakfast, held at Our Lady of Hope Church in Logan in 2007.

“I believe in the power of prayer,” Chaka Fattah said then, as the ministers walked around the room laying hands on the families who lost loved ones to street violence about a decade ago.

“Our city is in need of prayer, because the Lord can bring us together.  It’s obvious that it’s important for us to look past our differences and come together. We can do much if we come together in faith and prayer,” he said.

Today, Fattah thinks his greatest gift is his ability to bring disparate and opposing sides together at the table to either win one or engage in authentic compromise. He had to do just this when predatory lenders preyed upon many families in his district, in communities like Mount Airy, Germantown and Wynnefield — neighborhoods with high rates of homeownership.

Fattah referred to a bill that was instrumental in helping homeowners losing their homes  “Dodd Frank has helped families all over the country save their homes,” Fattah said. “It all started when homeowners in my district began coming to me with their stories.”

Fattah regrets that his constituents and supporters were hurt the day of the news and by the investigations he still asserts are largely unjustified, trials he felt are “inconsistent,” and some of charges he felt he was not guilty of. He acknowledges that some have distanced themselves from him, as far back as the time of the initial indictment.

Yet, many continue to support the federal lawmaker. This was clear when he was about to be sentenced and more than 200 penned letters were sent to Judge Bartle. Among them was Dr. Wise Young, the founding director of the W. M. Keck Center for Collaborative Neuroscience at Rutgers State University.

“Chaka Fattah is an effective champion of neuroscience research,” Wise said in his letter dated Oct. 31. “He spent time with scientists to understand the issues, knew the advances in the field so that he could better advocate for funding and passed legislation to support neuroscience. So, when I heard that he  had been indicted, I was shocked but nevertheless wanted to write in his support. He is a good man, a very hard worker, and very altruistic. He wanted to help people and did so with all his heart and experience…I hope that he can return soon to his work advocating for neuroscience research,” Young said.

As for Fattah, his final message to his former constituents is straightforward. “I just want them to know that the more than 30 years that they have invested in me paid off. I have put into place things that have positively impacted their lives. Even as a private citizen, I will always continue to help people. Know that many of the things I put in place will be there to help them no matter what happens,” Fattah said.

Lastly, Chaka Fattah’s family is standing by him. “The Fattah family is grateful that we have been able to help so many through service,” Fran Fattah said. “We are a strong family, as are many others, and we will get through this challenging period.”