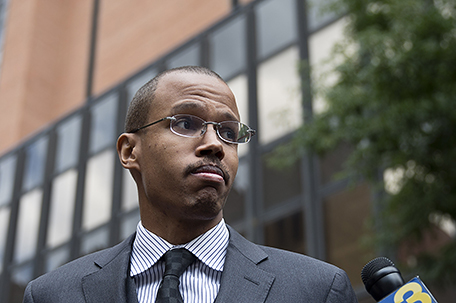 ABOVE PHOTO:  Chaka Fattah Jr. walks from the U.S. Courthouse in 2014, in Philadelphia. On Thursday, Fattah Jr. was convicted of 22 of 23 federal bank and tax fraud counts.  (AP Photo/Matt Rourke)

Fattah was convicted last Thursday of 22 of 23 counts that he misspent loans and some of the nearly $1 million in education funds he got as a school management subcontractor.

On Wednesday they asked the judge to give them bank documents from the prosecution’s evidence. They also listened to hours of Fattah Jr.’s conversation with his former college roommate, who was wearing a wire for the FBI as the two drank vodka.

Representing himself in court, Fattah used his closing arguments to say rogue FBI agents and prosecutors are railroading him because they didn’t like his lifestyle, for example, living at Center City’s Ritz-Carlton.

Fattah, who represented himself, contended the government built its case on a “deck of cards.” He says authorities targeted him because of his big-spending lifestyle, including a luxury condominium, and also wanted to hurt his father.

Chaka Fattah Sr. is an 11-term Democratic congressman. He was charged in an unrelated case in July with racketeering conspiracy, money laundering and other crimes, accused of misusing federal grants and charitable donations. Cong. Fattah has denied wrongdoing.

6ABC contributed to this report.