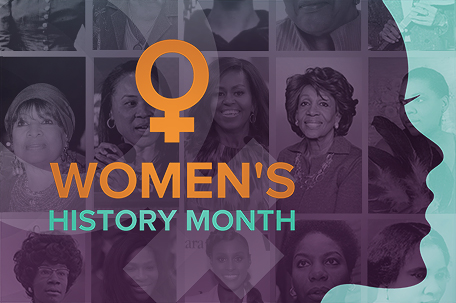 Women’s History Month — which celebrates the contributions and achievements of women throughout history– is an international event which is observed not only in the United States, but in Australia and the United Kingdom in the month of March, and in Canada in the month of October.

The history of America’s celebration is rooted in protest, when in 1857, a coalition of female factory workers in New York City took to the streets to bring attention to dangerous working conditions. It was followed by the first National Women’s Day on February 28, 1909, which was declared by the Socialist Party of America in response to the 1908 garment workers strike.

As a result of the successful lobbying efforts of numerous women’s groups and other concerned stakeholders to make the week an official nationwide event, President Jimmy Carter issued the first presidential proclamation designating the week of March 8, 1980 as National Women’s History Week.

In 1981, Congress took it a step further to officially designate the second week in March as National Women’s History Week, and in 1987, expanded the commemoration to encompass the entire month with the passage of Public Law 100-9.

Additional resolutions were eventually passed,  and each sitting president has since issued annual proclamations for what is now known as Women’s History Month.

The 2020 Women’s History Month theme — which selected annually by the National Women’s History Alliance — is “Valiant Women of the Vote.”  The theme honors “the brave women who fought to win suffrage rights for women, and for the women who continue to fight for the voting rights of others.”

Philadelphia is full of annual activities and events throughout the month which explore not only the official theme and women’s history throughout the nation and world, but the significant contributions of local women and their allies to the City’s history as well.

Read on for the Visit Philly guide’s partial listing on how to celebrate Women’s History Month in Philadelphia through moving art exhibits, engaging lectures and more. For more information, visit: www.visitphilly.com.

Note: Events in this list are arranged in chronological order.

Presented by Drexel University’s Vision2020, Women 100 is the largest centennial celebration in the U.S. honoring the 19th Amendment to the U.S. Constitution. The series presents programs and events throughout the year that celebrate American women and spark new ideas about the path to gender equality. In March, visitors can learn more about the #BiasCorrect campaign on International Women’s Day (March 6, 2020), watch a pop-up performance about equality advocate Lucretia Mott (March 8, 2020), and attend a talk about how images depicting liberty related to abolition and suffrage have changed over time (March 11, 2020).

Where: Various locations including the Kimmel Center, 300 S. Broad St.

Women who are composers, conductors, instrumentalists and vocalists star throughout The Philadelphia Orchestra’s season. In March, don’t miss conductor Marin Alsop as she leads performances of pieces from the classic Porgy and Bess (March 5-7, 2020).

My General Tubman at the Arden Theatre Company

Making its world premiere at the Arden Theatre Company during Philly Theatre Week, My General Tubman depicts abolitionist Harriet Tubman’s life and reflects on her legacy. Plot twist: Tubman is portrayed as a time-traveler, who jumps to a present-day prison in Philly and tries to bring inmates back with her to help fight slavery.

Votes for Women: A Visual History at the Brandywine River Museum of Art

The Brandywine River Museum of Art displays and explains century-old political cartoons, plays, posters, parades and fashion that formed the visual culture of the U.S. women’s suffrage movement. Drawings, illustrations, photographs of marches and rallies, clothing and accessories — especially sashes — re-create and contextualize this time of tangible art and physical action, long before social media or television. Activating the exhibition are curator talks and live performances.

For one week, the Brandywine River Museum of Art displays a replica Justice Bell to honor the 100th anniversary of the 19th Amendment. Some background: The Justice Bell — created in the likeness of the Liberty Bell by a Chester County woman — toured Pennsylvania in 1915 ahead of the state referendum on women’s suffrage to connect the cause to the struggle of the Founding Fathers. The referendum failed, but as a result, the Justice Bell became a national symbol for women continuing the fight for voting rights. (Bonus: The 2,000-pound original Justice Bell is on display at Valley Forge National Historical Park.)

The National Constitution Center celebrates the 100th anniversary of the ratification of the 19th amendment with a slate of programs during Women’s History Month that highlight the work of historical and contemporary women like Abigail Adams, Sojourner Truth, Harriet Tubman and Ruth Bader Ginsburg. Visitors can also learn more about the women’s suffrage movement during a workshop analyzing an educational music video inspired by Lady Gaga.

Women’s History Month at the Free Library of Philadelphia

The Free Library of Philadelphia hosts a number of awesome events with successful women authors during March. The impressive lineup includes Maira Kalman (The Autobiography of Alice B. Toklas Illustrated); Rebecca Solnit (Recollections of My Nonexistence) in conversation with Jia Tolentino (Trick Mirror: Reflections on Self-Delusion); Hilary Mantel (The Mirror and the Light); Katie Roiphe (The Power Notebooks); Emily St. John Mandel (The Glass Hotel); and Bernardine Evaristo (Girl, Woman, Other).

Where: Various locations including the the Parkway Central Branch of the Free Library of Philadelphia, 1901 Vine Street

Seat at the Table at the Kimmel Center

A free, seven-day-a-week, interactive art exhibition by Dome Collective invites the public to experience women’s representation in places of power — seats at tables — through 3D infographic furniture, while a wall of interactive screens introduces gender barrier-breakers throughout women’s history. This event is one of the many programs part of Women 100, presented by Drexel University’s Vision2020.

Women’s History Month at The Library Company of Philadelphia

For Women’s History Month, The Library Company of Philadelphia hosts a lecture on a National Archives Museum’s exhibition, Rightfully Hers: American Women and the Vote, with one of the curators (March 5, 2020); a collection review focusing on the seventh-century-B.C. Greek lyric poet Sappho and how a resurgence of interest in her influenced 20th-century feminism (March 10, 2020); and a three-part seminar about how Philadelphia women used material culture and domestic spaces to spark excitement for the revolution (March 11, 25 & April 22, 2020).

Where: The Library Company of Philadelphia, 1314 Locust St.

Attendees celebrate the spirit of an inclusive international women’s movement and create a safe, caring space for women, trans and non-binary people at this event at the Asian Arts Initiative. The evening features interactive stations, performances and a queer dance social. Tickets are $15 to $20 but no one will be turned away if they don’t have the means to pay for a ticket.

Philly Art Collective Gallery hosts this monthly event showcasing women artists, giving them the opportunity to market their work and connect with others. Just as with previous events, the first 200 tickets to the March edition of HERspace are free. Tickets are donation-based after that.