Cause for hope and caution following police shooting in home 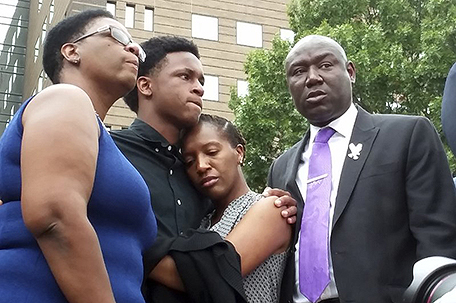 ABOVE PHOTO: In this Sept. 10, 2018 file photo, Brandt Jean, center left, brother of shooting victim Botham Jean, hugs his sister Allisa Charles-Findley, during a news conference about the shooting of Botham Jean by Dallas Police Officer Amber Guyger, outside the Frank Crowley Courts Building in Dallas. He was joined by his mother, Allison Jean, left, and attorney Benjamin Crump, right. Guyger, who was fired soon after the shooting and charged with murder, said she mistook Jean’s apartment for her own. She was convicted in early Oct. 2019 — a rare jury decision — and sentenced to 10 years in prison. (AP Photo/Ryan Tarinelli, File)

By Errin Haines and Corey Williams

In the days after Atatiana Jefferson’s killing in her own home by a white Fort Worth police officer, many in the Black community say they’ve seen at least initial signs of swifter action with the officer’s arrest, but also are noticing some recurring and troubling themes. These include the release of police body camera footage and details from an arrest warrant showing that Jefferson had a gun — moves that are being perceived as attempts to place blame on the victim. Jefferson’s shooting Saturday in her home is the latest high-profile one in the era of the Black Lives Matter movement, which the fatal police shooting of Michael Brown in Ferguson, Missouri, helped fuel in 2014. The events that followed her shooting have unfolded in ways that are both typical and unique, leaving her family and activists to balance hope with caution.

The officer who shot her, Aaron Dean, was taken into custody two days after the killing. Jefferson’s family had been calling for an arrest.“We would want them to move as swiftly as they move when it’s a black person who is accused of a crime,” said attorney Benjamin Crump, who has represented several black families whose loved ones were killed by police officers in recent years. “It should not be any different if you have a gun or badge.”

Jefferson, 28, was killed in the early hours after a neighbor saw the front door at Jefferson’s house had been left open and called police. Jefferson had stayed up late playing a video game with her 8-year-old nephew, who saw her get shot. She was shot through a back window by Dean, who was outside the home. Dean was not heard identifying himself as police on the bodycam video, and Interim Police Chief Ed Kraus has said there was no sign Dean or the other officer who responded even knocked on the front door. Dean resigned before being charged with murder Monday.

The killing immediately sparked outrage and peaceful protests in Jefferson’s Texas community, which was still reeling from last year’s shooting death of 26-year-old Botham Jean, a Black accountant from the Caribbean island nation of St. Lucia who was killed in his apartment by a White Dallas police officer who was his neighbor. The officer, Amber Guyger, was fired soon after the shooting and charged with murder.

Guyger, who said she mistook Jean’s apartment for her own, was convicted earlier this month — a rare jury decision — and sentenced to 10 years in prison, a punishment seen by some as too lenient for the crime.

On Monday, Fort Worth Mayor Betsy Price, who is White, penned a letter to the city expressing sadness and regret for Jefferson’s death, an unusual move for a public official in such cases.

“On behalf of the entire city of Fort Worth — I am sorry,” the letter reads. “To Atatiana’s family — I am sorry. There is nothing to justify or explain what happened on Saturday morning. Nothing.” Price’s letter also addressed James Smith, the concerned neighbor who called police, and Jefferson’s nephew, who she asked the city to surround with prayers and support.

But even as the mayor and police chief were calling the shooting of Jefferson, a college graduate who was considering medical school, inexcusable, the inclusion of photos of a handgun found inside her home with the bodycam footage was seized upon by some as an effort to discredit her. Similarly, some reacted negatively to an arrest warrant that quoted Jefferson’s nephew as saying his aunt pulled out a gun after hearing suspicious noises behind her house. Price in her letter denounced the Police Department’s initial mention of Jefferson’s licensed handgun as “irrelevant.”

Jean was unarmed but authorities pointed out that he had marijuana in his apartment, which activists called an attempt to smear him. And after Brown was killed by white Ferguson officer Darren Wilson, police said the unarmed, Black 18-year-old was suspected of stealing cigarillos from a convenience store before the shooting and they released surveillance video of Brown, which upset protesters. There have been encouraging signs of transparency in the handling of Jefferson’s killing, with police releasing the bodycam footage and Dean’s name to the public on Monday, said Villanova sociologist Jill McCorkel, author of “Breaking Women: Gender, Race and the New Politics of Imprisonment.”

“It’s critical that those names are released right away,” said McCorkel, whose work focuses on police violence against women. “If Jefferson had shot first, her name would’ve been released to the press immediately,” she added. “We should have the same balance of accountability, particularly because police are public servants acting in all of our names.”

Fort Worth police have had six deadly force shootings since June, and activists have been pushing for reform in the city for several years. Civil litigation attorney Geoffrey Fieger said some law enforcement agencies now appear to be responding appropriately and firing officers involved in misconduct. “In the past, (police departments) didn’t even fire them,” said Fieger, a Detroit-based lawyer who represented the family of 7-year-old Aiyana Stanley-Jones. The family sued the city and was awarded more than $8 million after she was shot to death during a 2010 police raid at her home while sleeping on a sofa.

While Dean wasn’t fired, Kraus said he would’ve been had he not stepped down voluntarily.

Jason C. Johnson, president of the Law Enforcement Legal Defense Fund, said caution should be taken while the facts are still being investigated. “There is tremendous pressure on mayors and prosecutors and police chiefs to take dramatic and very swift and harsh action on cases that target this type of attention,” Johnson said. “Normally, these cases will be reviewed more exhaustingly.”

Some are already skeptical that they will see Dean held accountable in a courtroom, an outcome not often seen in cases where the officer is a defendant. Louis LaFleur, a 68-year-old retired school custodian who lives a block from Jefferson’s home, said he has little faith in the criminal justice system in the case.