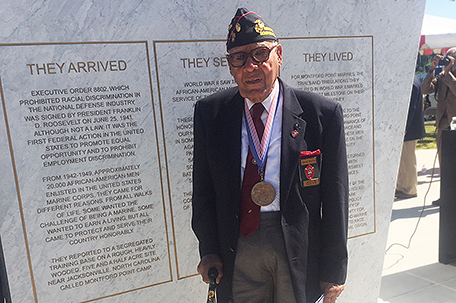 This week’s Philadelphia Sun Spotlight features Shane Fordham, Carroll W. Braxton, and Monique Braxton; a local family that’s honoring the legacy of the Montford Point Marines and doing their part to change the narrative when it comes to telling Black stories.

Shane Fordham is scheduled to participate as a panelist for the Black Truth Film Festival on June 11, the same day his documentary “Montford Point Marine” will be featured during the film festival, which will now be virtual due to the COVID-19 pandemic.

“This is an opportunity for my grandfather to be heard,” Fordham said. “In times like these, I think it is important to look back on our African American history and use our past lessons as a way to motivate us for the future.”

What started out as a high school project developed into an award-winning production that has been celebrated on various platforms and is gaining national attention.

“I was surprised I won an award [from the Black Truth Film Festival], I wasn’t expecting this documentary to be as big as it is,” Fordham said. “I was really just making a documentary for my class and as something that I can have — my grandfather on tape to show my grandchildren, his great grandchildren.”

The documentary was selected to be a permanent fixture at the National Marine Corps Museum in Quantico, Virginia. It was also chosen from more than 2,000 entries to be shown at the 2019 All American High School Film Festival in October 2019.

“I always heard stories about my grandfather growing up,” Fordham said. “I would just listen. I started off creating something that I can have as my own keepsake, but then it turned into something much bigger than that. I didn’t realize the effect that this documentary would have on other people.”

With the assistance of his mother, Monique Braxton — an Emmy award-winning veteran journalist, and beloved news reporter with NBC10 — Fordham was connected with Diane Turner, curator of the Charles L. Blockson Afro-American Collection at Temple University Libraries.

Turner helped to put all of the pieces together, providing an historical foundation and another Marine child perspective.

“My reaction to the documentary was wow! The apple doesn’t fall too far from the tree,”  Braxton said.

“I’ve always been passionate about sharing people’s stories,” she continued. “I’ve taken that on throughout my career as an African American journalist, because I feel like everybody’s story has the right to be told. I believe that everyone has the right to have a seat at the table, because that’s something that my dad and my mom always enforced with us “

“I sat down with Shane and posed a few questions. He jumped in with a few questions. He showed me the finished project and I couldn’t be more proud. Shane asked who was a good historian and the first person I could think of was Dr. Diane Turner. She gave us a lot of insight on the time period,” Braxton concluded.

Though she is a storytelling pro, Braxton said that while she contributed by giving insight as the daughter of a Montford Point Marine, it was Fordham who stepped up and delivered.

She said her son has a natural journalistic knack and that — of course — Carroll W. Braxton is really the star of it all.

“I sat the camera in front of my grandfather and let him tell his story, and I think that is what really separates this documentary from others,”  Fordham said. I actually have a live primary source in my documentary that reinforces the message.”

The Montford Point Marines were the first African Americans to enlist in the U.S. Marine Corps after President Franklin Roosevelt issued an executive order establishing the Fair Employment Practices Commission in June 1941.  These men trained at Camp Montford Point in Jacksonville, North Carolina from August 26,1942 until the camp was decommissioned on September 9, 1949.  They were the largest number of Black Marines to serve in combat during WWII.

“You’d be surprised that a lot of people never heard of the Black Marines,” Carroll  Braxton said.

“‘They made this special camp for us. The Marines have two recruit depots, one in San Diego, California and the other on Parris Island, North Carolina,” Braxton explained. The special camp for us was inside of Camp Lejeune.If you lived anywhere in the United States and you were Black, you had to come all the way across the country to come to Montford Point.”

The documentary recounts the harsh treatment and inhumane conditions recruits had endured then, and how they persevered.

“They treated us like we weren’t even human,” Braxton recalled. “It was quite an experience. Calling us the n-word constantly.” .

“Being one of the Blacks in the Marine Corps, they tried to break us,” Braxton continued. “At first, they said that they didn’t want us and we didn’t belong. [They would say] ‘this is a White man’s Marine Corps and no place for you and you’ll never make it even though boot camp.’ They did everything inhumane to try to make sure that we [could not] make it through boot camp.”

Braxton said that it was the talks that he and his Black counterparts would have amongst themselves that motivated them to commit and to believe that other than death, they were going to make it.

“The Tuskegee Airmen, they made it. We would talk about the Buffalo Soldiers, what they went through, and then we even talked about slavery  — how our people made it on those ships coming across that water. We don’t know how many days, or how many did make it and how many didn’t make it. That talk we had amongst ourselves inspired us to keep going, regardless. Other than death, we were going to make it. And so we made it,” Braxton concluded.