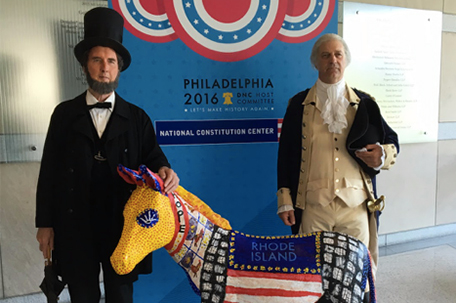 Note: Purchasing tickets will give you access to PoliticalFest, a fun, interactive festival related to American history and politics, taking place to allow members of the public to participate in Convention-related activities. These tickets will not grant access to the Democratic National Convention itself, which is for credentialed guests only and is not open to the public.

In celebration of the Democratic National Convention, Philadelphia 2016, the convention’s host committee, is presenting PoliticalFest, a one-of-a-kind festival celebrating political history, government and the road to the White House.

The experience will consist of exhibits at seven participating locations, each centered around a specific theme related to American politics, government, and history. The locations will feature different displays and attractions, including the campaign trail, Pennsylvania & the Presidency, a media zone, political entertainment, and more. There will also be a staging area for live performances, political game competitions, and panel discussions. It will run from July 22nd-27th.

This event will be ticketed, open to the public and appropriate for all ages.  Each ticket is good for all six days of PoliticalFest and grants access to all participating locations.

Ticket Prices (A booking fee will be charged) :

$5 for children 18 years & under, college students with valid ID and seniors 65+

The Heritage Center of the Union League of Philadelphia, 140 S Broad Street

All Locations can be found on the PoliticalFest Map.

In addition to running its regularly scheduled service, there will be an additional dedicated bus loop serviced by Philly PHLASH vehicles connecting all seven participating locations, and ticketholders will be able to use the bus to travel between locations. PoliticalFest tickets will be honored on the PHLASH Downtown Loop throughout the week, so ticket holders can connect to either loop. Many locations are nearby each other, and PoliticalFest attendees are encouraged to walk between many of the sites.