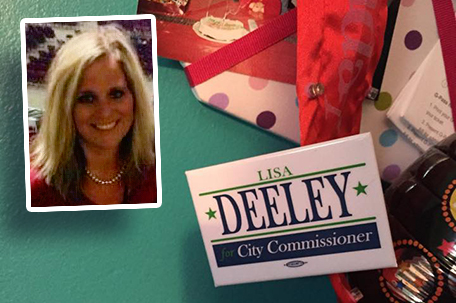 Lisa Deeley is the daughter of former Sheriff Barbara Deeley, but has built a career of service to the city over the years.

Deeley, 49, has lived in Rhawnhurst her entire life, graduating from St. Hubert’s High School. She worked for Alan Butkovitz for 18 years, first as Chief of Staff for his legislative office in Harrisburg, then as the first Director of Community Ourreach for the City Controller’s Office.

Deeley has spent the past three years working for Councilman Bobby Henon, leaving the job when she decided to run for City Commissioner in January.  Working for Henon gave her experience working on the neighborhood level, she said.

As for her qualifications to oversee elections in the city as a City Commissioner.  Deeley says she started as a Judge of Elections and was elected as a Committeeperson when she was 21. She would have run for that office at 18,  Deeley said, but her mother told her she needed to understand the voting process before running for office herself.

Deeley says she believes her knowledge of the voting system from the ground up is very important in the job of City Commissioner. “I think that we do a very good job in the election process as far as people getting to vote,” she said. “We have a lot of citizens that step up and work for a meager wage so that people get their votes counted. But there’s always room for improvement.”

Deeley wants to modernize the election system. She believes that technology needs to be harnessed to help the electorate understand the electoral process better, she said.  She plans to do outreach to voters if elected to see if they feel if the process is open and if they don’t think it is, how to make it better for them, even if it means starting from scratch, she said.

There are a lot of things that are outdated in the commissioner’s office, Deeley said.  One of those things is how poll watcher certificates, the certificates that give people pemission to work at polling places, are put together.

Deeley also believes its time to change how Election Day workers are paid.

“We use a three-sheet carbon” for paying the poll workers,” she said. “I can’t believe that in the era of smartphones we can’t find a way to pay people more efficiently.  There’s too much paper being used to run elections in Philadelphia.”

One thing that Deeley isn’t ready to change is the voting machines. Unlike the changes proposed by outgoing commissioner Stephanie Singer, she believes that ther’s no need for new voting machines and that like an older car,  they can continue to run efficiently if properly maintained.

“The city is faced with much more pressing issues,” Deeley said. “We don’t need to spend money on voting machines.”

Deeley says she wants to be a commissioner because she wants to improve the city’s lackluster voter turnout through education.

“Everyone has the same complaints, they aren’t getting city services, they  don’t know how to get the services the city provides,” she said. “My answer has always been there is one place you can go every six months that your voice will be heard and that’s the voting booth.”

“We can no longer be satisfied with 25, 20 18 percent voter turnout,” Deeley continued. “ I believe my strong background  will help me and help the citizens of Philadelphia increase the voter turnout through voter education.”