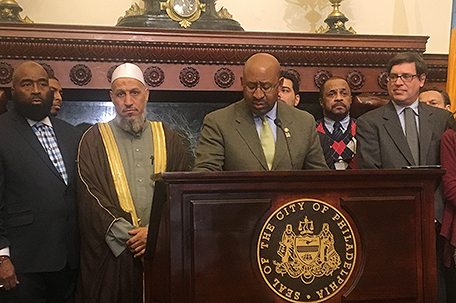 On Tuesday, Mayor Michael Nutter called Republican presidential candidate Donald Trump something I can’t repeat in a family newspaper. The only thing that’s making me mad about that is that I didn’t think of it first.

Throughout the eight years that Nutter has held the city’s highest office, he hasn’t always made the right moves in the minds of a lot of people, but he’s always kept it interesting. He’s threatened to kick the butts of child molesters. He’s used his sarcasm like a Samurai sword at news conferences. He’s appeared on national television on a variety of issues.

But this week, Mayor Michael Nutter found himself in news outlets around the country (and internationally if I understand correctly) because he called fellow University of Pennsylvania Alum/billionaire/reality star/Republican Presidential Candidate/proof that our democracy is broken/Donald Trump an a**hole.

And when you consider what made him do it, Mayor Nutter might be going out on a high note. If anything, I’m sorry that I didn’t think of it first.

On Tuesday, Nutter held a news conference condemning the folks who left a bloodied pig’s head at the front door of the Al Aqsa Islamic Society in Germantown on Sunday. While finding the head of a dead animal at your doorstep would be disgusting under any circumstances, having the head of an animal whose consumption is specifically banned by the tenets of your religion sends a pretty clear message.

That message? We have your back.

“This was a terrible, thoughtless, ignorant act,” Nutter said. “This was an insult to all freedom loving, God fearing people in the city. We want to let [the Muslim community] know that we’re there for them. This kind of thing has no place in the City of Brotherly Love and Sisterly Affection.”

Now earlier that day, someone felt the need to ask Nutter about comments Trump made regarding Muslims. In the wake of the shootings in San Bernadino, Trump has stepped up his special brand of Islamophobia by calling for such things as Muslim registration, denying visas to Muslims wanting to visit the country, and the shutting down of mosques.

In light of the Al Aqsa Islamic Society incident, Nutter felt The Donald’s comments merited a response. And like the Philadelphia Daily News cover that’s making the rounds, the Mayor referenced someone whose name has a very specific connotation.

“Donald Trump is taking a page out of Hitler’s book,” Nutter said. “He’s blaming an entire group for the acts of individuals and suggests banning that group as the solution to a problem that does not exist. He’s trying to radicalize America against our Muslim brothers and sisters, and that’s not what America is about.”

When asked if he might have gone a little far by comparing Trump to Hitler, Nutter not only said no, he dropped the A-hole bomb.

The air went out of the room. I mean hey, when you curse in front of a room filled with religious leaders, it’s going to.

But to be honest, I’d be willing to bet that some of these ministers said to themselves, “Man, do I wish I could have said that!”

Let’s be honest here. Donald Trump’s entire presidential campaign has kind of defied conventional political wisdom in a lot of ways. It used to be that the most sure fire way to NOT get elected to an office was to offend everyone in sight.

Trump has called Mexicans rapists and murderers. His poll numbers go up.

He gets an endorsement from former Klan Grand Dragon David Duke. Black ministers meet with him, something I still don’t get.

He calls for a ban on a religious group, something that’s blatantly unconstitutional.

And yet his audience, an audience I spent three years talking with when I covered hate groups in Reading, Pennsylvania, continues to grow.

It’s kind of depressing to be honest.

So in my own way, I appreciate Mayor Nutter for speaking for those of us who have had about enough of this nonsense.

I just wish I had thought of it first.