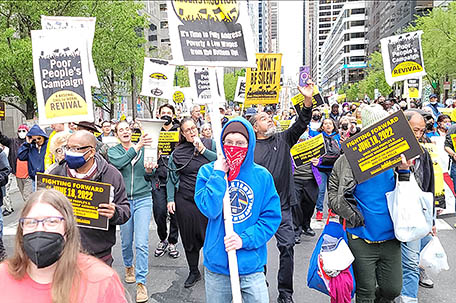 For all the talk and focus on relief for the struggling middle class, policymakers tend to overlook the unique impact the same issues have on poor and low-income people across the country.

Ignoring this constituency is risky business. Despite concerted efforts across the country to disenfranchise them, of the 168 million voters who cast a ballot in the general election for president in 2020, 58 million — or 35% of the voting electorate — were poor or low-income.

In Pennsylvania alone, poor, and low-income people made up 34% of all votes cast in that election.

The Poor People’s Campaign: A National Call for Moral Revival has continued to focus on these issues during a multi-city mobilization tour leading up to their Mass Poor People’s & Low-Wage Workers’ Assembly and Moral March on Washington and to the Polls being held on June 18.

Philadelphia was one of 10 cities included in the tour. The Pennsylvania Poor People’s Campaign took the lead during a march and rally downtown on Monday, highlighting the priorities and demands of poor and low-income residents of the city and Commonwealth.

The national co-chairs, Bishop William J. Barber II — who spoke to participants virtually — and Rev. Dr. Liz Theoharis, were joined by local leaders from the city, state, and region, and at least 200 participants.

In addition to the day-to-day struggles that poor and low wealth populations face with housing, health insurance, employment and food insecurity, the fallout from the COVID-19 pandemic has been enormous — and deadly.

The Poor People’s Pandemic Report showed that over 5,000 people have died of COVID here, the poorest major city in the nation, with almost half of the population (44.76%) living at below 200% of the federal poverty line.

Additionally, the report found that 8.1% of Philadelphians are uninsured and that 54.3% of people in the city are paying more than 30% of their income on rent.

“An invisible airborne virus has proven to us that we are caught up in an inescapable network of mutuality and has shown us, with vivid detail, the deadly, deadly consequences of systemic poverty and systemic racism in our nation,” said Dr. Sharrelle Barber, who is the inaugural director of the Ubuntu Center on Racism, Global Movements & Population Health Equity at the Drexel University Dornsife School of Public Health. “Here in the city of Philadelphia, the poorest big city in the nation, we have felt the toll of COVID 19 viscerally as it has exacerbated the entrenched inequalities that existed prior to the pandemic — just ask the families and communities who have lost too many loved ones.”

Jessica Boyles, a home healthcare aide from northeast Pennsylvania,  said she suddenly became “essential and a hero” when the pandemic hit in 2020. Ironic, considering the fact that she was a health care worker with no health insurance.

“And at $11 an hour, I made too much for Medicaid but not enough to buy insurance,” Boyles said in prepared remarks. “I looked for a new job offering insurance benefits and the best I could find was an agency requiring a full year of employment before benefits kicked in. I took that job, and I worked that year only to find that my benefits were so low and the deductible so high, I couldn’t actually afford to use it.”

One of the constants of living as poor and low wealth is the dilemma of not having any breathing room after paying for the basic necessities of life each month, despite working hard and living frugally. Things like day trips, eating at restaurants occasionally, and child sports uniforms are considered luxury items.

Another one of the main topics of discussion was making the Child Tax Credit — first instituted at the beginning of the pandemic — permanent to resolve this monthly quandary.

Carol Hill, an activist, and grandmother from North Philadelphia who is the main caregiver for three grandchildren, was also a kinship caretaker for two nieces who were taken away by the child welfare department because they deemed her to be too poor to raise them.

“I fought back by protesting, writing letters and getting support, but they gave the girls to a more distant family member who has more money,” Hill told rallygoers. “I haven’t seen them since 2013. The groups I work with are fighting for money for mothers and grandmothers for the work of caregiving. The Child Tax Credit was a godsend for me and my family.  It helped me pay the bills, keep cable on for the grandchildren, buy them clothes and take them to the amusement park.  If I had had CTC earlier, child welfare might not have taken my nieces from me.”

Other local concerns raised during the rally included the effects of gentrification and for profit prisons in the city and state, as well as ongoing environmental racism and violations of immigrant workers rights.

There is a moral imperative for those in power to address unnecessary suffering, Bishop Barber, who joined the meeting remotely, said in prepared remarks.

“If Russia’s atrocities in Ukraine demand action, then so too does the failure of the U.S. Senate to pass Build Back Better’s provisions for affordable housing, green jobs, living wages for care workers, and a child tax credit that will immediately lift four million children out of poverty,” Bishop Barber said. “If Putin’s attack on democracy in Europe can unite Western democracies, then the assault on voting rights in statehouses across America must, at the very least, unite Senate Democrats in their resolve to pass federal voting rights protections before the midterms this fall.

The moral imperative of these issues is no less pressing than the human suffering in Ukraine. The only difference is that we have believed the propaganda that tells us the suffering of America’s poor is either their fault or the inevitable cost of economic growth.”

Theoharis issued a call for a radical redistribution of political and economic power, a revolution of moral values to address these disparities.

These are “times of staggering danger, but also of enormous possibility, moments that should be met with unbridled imagination, absolute seriousness, and the music of those jubilee horns,” she said in prepared remarks.

“Above all, in a world distinctly stacked against us, we must believe that we can succeed.” One thing that was emphasized throughout the event is that the main gathering on June 18 is a beginning of an ongoing effort toward permanent change, not a performative display.

“I’ve just come with a question. Are you ready? Are you ready for change? Are you ready for social transformation?”  Rev. Dr. Alvin O’Neal Jackson, executive director of the assembly and march in DC, asked the participants. “This meeting will be a major massive, transformative, generational disruptive gathering, not just for a day, but a declaration of an ongoing, committed moral movement to shift the political narrative, build power and call this nation to fully address poverty and low-wealth from the bottom up.”

For more information about the Mass Poor People’s & Low-Wage Workers’ Assembly and Moral March on Washington and to the Polls, email: [email protected] or visit: www.poorpeoplescampaign.org.