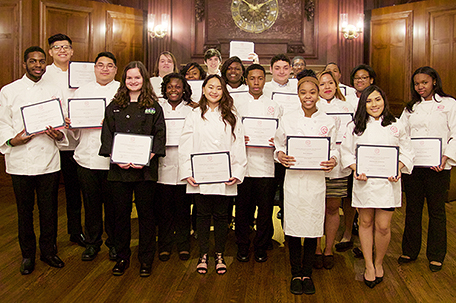 While traveling down the education road, 19 culinary arts students from public high schools, in the Philadelphia region, decided they could stand the heat, and wanted IN the kitchen.

They honed their craft by learning the fundamental skills and science behind food. Their hard work paid off when they were honored by the Careers Through Culinary Arts Program (C-CAP) with scholarships that would allow them to pursue their culinary dreams.

The scholarships were awarded to high school seniors to attend local culinary schools and some of the most prestigious culinary schools in the country.  Several students also received C-CAP Education Scholarships, cash awards that will help defray the costs of books, supplies, housing, and other expenses while at community colleges or other culinary institutions.

The students competed for the scholarships a week earlier by participating in the C-CAP Philadelphia Cooking Competition for Scholarships. The students were finalists, representing local high schools. C-CAP re-created the intensity of a restaurant kitchen at Drexel University, pitting the student against the clock.

They faced off in a savory and sweet challenge, with ingredients that required them to produce three dishes that included crepes, chicken, and an omelet. They were judged by a panel of accomplished judges, some C-CAP alums, on presentation of the dishes, knife skills, techniques in the kitchen, taste, sanitary food handling, and timeliness.

The winners might have envisioned themselves working at their dream jobs. However, the next order of business is to secure an education that will get them there, according to Keri Fisher, program director. She pointed out that each student has varying and unique components that will influence his or her educational decisions. “Plotting a course for success pays dividends on the job,” said Fisher, who noted that student’s academic commitments might be a year-long certificate program at a local community college or a more extensive program at a culinary school or college.

“While some may think that a culinary education may only lead to a cooking job, a degree from a culinary school may train students for a variety of careers, including restaurant management, hotel management, and other related position,” said Grausman, who noted it’s also possible to begin a culinary career by starting at an entry-level job and “working your way up the ladder.”

The C-CAP Cooking competition, which was founded in 1990 by Grausman, is hosted across the country and are the culmination of the C-CAP high school program for underserved teenagers at risk of leaving high school without a job or college prospects.  “The C-CAP program offers direction, a set of useful skills, scholarships, and the potential for a fulfilling career in a growing industry,” said Grausman.

In addition to the culinary school scholarships awarded, C-CAP also announced the Philadelphia-based region winner of the 2017 Meatless Monday Recipe Contest. The scholarship was presented to Lauren Moore, a student at the A. Phillip Randolph Career Academy for her Pasta Primavera dish.

C-CAP high school students from around the country were invited to create an innovative meatless noodle dish. The contest introduced the students to the national Meatless Monday public health initiative.