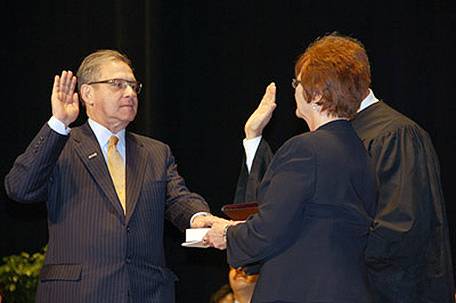 ABOVE PHOTO: City Controller Butkovitz at the swearing-in ceremony for his third term.

In an inauguration address marking the beginning of his third term, City Controller Alan Butkovitz last week put forth a bold plan to harness the economic power of Philadelphia’s leading institutions to create thousands of new jobs for City residents.

“Our anchor institutions all have major physical plants and identities that are tied to our City and region,” said Butkovitz.  “We need to connect our historical strength in making things to those large entities that purchase things.”

Referring to a study to be released by his office early this year, Butkovitz estimated that Philadelphia’s higher education and healthcare institutions are exporting over $2 billion a year to buy the goods and services they need to operate.

“If we can persuade the anchors to shift just 25 percent of these purchases to Philadelphia vendors, we would create more than 5,000 new jobs,” said Butkovitz. “These new job holders would produce wage tax revenues and more importantly they would spend money locally and create even more local jobs.

“We need to boost the tax base significantly by growing the pie instead of spending our time trying to figure out different ways to slice it,” said Butkovitz. “Cities that don’t have Philadelphia’s resources like Cleveland, Detroit and Baltimore are already deploying this model to create jobs.”

According to Butkovitz, Philadelphia’s policy discussions have been too narrowly focused and not enough attention has been paid to innovative strategies for creating jobs in the City, although he noted that Council President Darrell Clarke’s Jobs Commission and Councilman Bobby Henon’s Manufacturing Task Force have taken large steps in the right direction.

“The debate has been centered on tax policy changes as if they are a panacea for direction,” Butkovitz said.  “Philadelphia’s unorthodox blend of taxes is a least partially responsible for the City’s anemic growth, but initiatives like these will really change the conversation.”

In addition, the Controller wants to provide opportunities that will generate the kind of revenue that can help the City reverse the tragic decline of the school system and prevent the deterioration of vital city services.

“We need leadership that will work with other municipalities across the Commonwealth to change state law so we can tax commercial property at a different rate than residential property,” said Butkovitz.  “This would enhance revenues without harming homeowners and it would allow for creative changes to business taxes.”

“We must take much more dramatic action than tax policy changes to produce substantial job growth and accelerate the City’s economy.  I plan to lead this effort and invite all public officials who agree with this initiative to join me.”

To view the complete inaugural address, which was delivered at the Academy of Music, please visit the City Controller’s website at www.philadelphiacontroller.org.