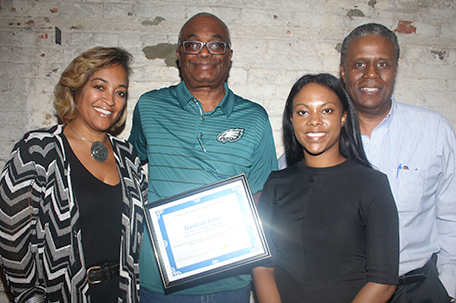 ABOVE PHOTO:  From left: Iola Harper, Deputy Director of Commerce, Hanford Jones, Danielle Green, owner Indigo Bleu and Earl Harvey.  Jones was given an award for the work he does in the  community. (Photo by Robert Mendelsohn)

Last week, business leaders and local government officials kicked off the 33rd Annual Philadelphia Minority Enterprise Development (MED) Week. The week-long event highlighted minority businesses and the resources that exist to help them grow. Organizations from across the region hosted host an array of events focused around this year’s theme, “All Roads Lead to Inclusion.”

During MED Week, featured were more than 30 events, including educational workshops, interactive panel discussions, and one-on-one coaching. MED Week also was recognized by Philadelphia’s City Council during its public session, on Thursday, September 28.

“Philadelphia is in the midst of an urban renaissance, and our minority-owned businesses are a vital part of that success,” said Iola Harper, Deputy Commerce Director for the Office of Economic Opportunity (OEO). “MED Week is an opportunity to celebrate the tapestry of vibrant minority firms across this region, and for local organizations to provide training, tips and connections to support these businesses.”

The organizations involved in MED Week provided provide support to minority-owned businesses. Their major objectives were helping companies build capacity and connect their businesses to City and quasi-public contracts. This exercise, according to the City of Philadelphia’s Fiscal Year 2016 Annual Disparity Study, does impact minority businesses favorably. 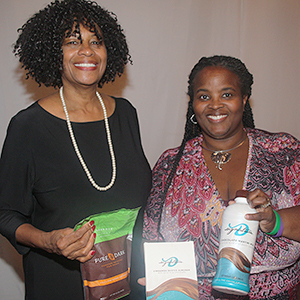 SUN COO Leah Fletcher and Judith Dumorney-McDaniel Independent Curator for The Cocoa Exchange were among the guests for the kick off Med Week which was held at Indigo Bleu on Tuesday, September 26th.
(Photo by Robert Mendelsohn)

According to the report, minority, women and DSBE businesses received $303.9 million from City and quasi-public contracts for the FY16, up from $290 million in FY15. This includes contracts for professional services, public works and services, supplies and equipment. The average contract size also increased in FY16 to $260,000, up from $210,000 the previous year.

The Black Professional News held a MED Week preview, which was a networking reception in West Philadelphia. Earl Harvey, publisher of BPN, indicated that such events provided attendees an opportunity to connect with business leaders, owners and suppliers. “Many of the individuals who participate in major networking events have the capacity to support the advancement of their fellow business colleagues,” said Harvey.

Following is an overview of several events:

• The MED Week Kick-Off Breakfast welcomed program participants and invited them to take advantage of the business opportunities for business growth and development. The Monday, October 2, opening event was followed by “Open for Business” – a session highlighting current and future contracting opportunities offered by the City of Philadelphia.

• SEPTA and PhilaPort presented information about contracting opportunities in a workshop entitles All Roads and All Modes: Roads to Inclusion in Multi-Modal Transportation Projects on Tuesday, October 3.

• Before Wall Street: A Black Man’s Forum for Current and Aspiring Business Owners was sponsored by the Mayor’s Office of Black Male Engagement, on Wednesday, October 4. A panel of business owners shared the nuts and bolts of owning and operating a business in Philadelphia for those Black men pursing entrepreneurship.

• The Enterprise Center’s hosted its signature fall event, “Lighting the Torch”, on Thursday, October 5. The occasion is an opportunity to recognizing excellence in the field of minority entrepreneurship.

• The Philadelphia Airport 2017 Annual Business Opportunity Forum, which was held on Friday, October 6, provided information about upcoming opportunities for the facilities multi-million dollar, multiyear Capital Program. Projects will include improvements to terminals, taxiways, and runways.

For more information, and the full list of workshops and events, visit https://business.phila.gov/medweek.