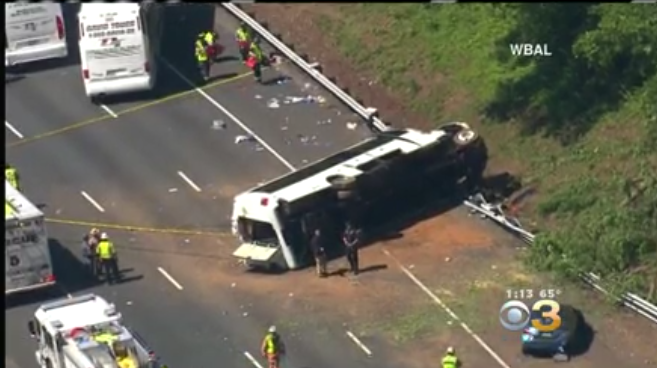 HAVRE DE GRACE, Md. (CBS) — A Phoenixville-based charter bus carrying nearly 30 students from Philadelphia to Washington, D.C., for a field trip was involved in an accident in Maryland that injured over two dozen people.

Family members of I-95 Havre de Grace bus crash patients can call the school district at 215-400-5858 or the county offices in Maryland at 410-838-5800 for information on patient reunification and updates.

The students involved in the crash are eighth-graders from Charles W. Henry School in Philadelphia’s Mount Airy neighborhood. The charter bus the students were on is from Phoenxville-based Werner coach.

“Werner Coach wishes to express its sorrow and sympathy to those impacted by this accident,” the bus company said in a statement.

At least 25 people were injured following an accident involving an overturned charter bus on southbound I-95 in Harford County.

One adult and one child were airlifted from the scene. Others on the bus were transported by ambulance to area hospitals.

Several have already been discharged from the hospital. There were no fatalities.

Dr. Steven Fountain of Harford Memorial Hospital said that most of the injuries at his hospital were contusions and sprains.

“The accident was very traumatic for them. They weren’t sure how hurt they were,” Fountain said of the students, adding that they “seem to be in much better spirits now.”

The accident occurred near Exit 89 in Havre de GraceAccording to Maryland State Police, there were 26 students and three chaperones onboard the bus.

Maryland State Police said that preliminary information indicates that a driver attempted to pass the bus, lost control, came back across lanes and clipped the front of the bus.

“We also have a passenger car on the scene that investigators believe was involved in some way.”

According to Maryland State Police, the Harf County State’s Attorney’s Office says charges will be withheld pending the conclusion of the investiation.

“We’re trying to figure out how to gather community around anyone who needs support — watching other children or figuring out how to get down to where their children are. We don’t know the extent of what happened or how bad anything is, but we’re trying to prepare ourselves to offer whatever support is needed,” said Corsover.

Philadelphia School District Superintendent William Hite Jr. says that they are working on a transportation plan to help reunite parents with their children. Hite added that support staff has been dispatched to the school.

The bus was part of a caravan going to Police Week in Washington, D.C. A bus filled with Philadelphia police personnel was in a caravan and stopped to offer assistance when the crash occurred.