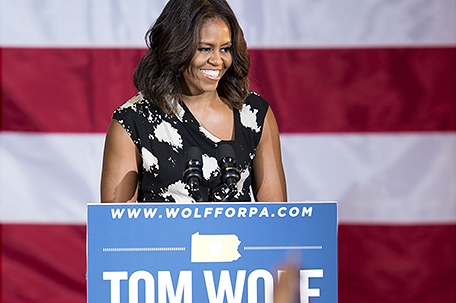 Michelle Obama told a crowd Wednesday in the Democratic Party stronghold of Philadelphia to come out in big numbers for first-time candidate Tom Wolf in the election for Pennsylvania governor.

The well-traveled first lady told hundreds gathered at the Dorothy Emanuel Recreation Center in northwest Philadelphia that Wolf will refuse to accept crumbling classrooms and teacher shortages, a shot at school funding cuts under Republican Gov. Tom Corbett that are deeply unpopular in Philadelphia.

She also said Wolf would align with her husband’s priorities in fighting for an increase in the minimum wage and improving pay for women.

“If we truly want to finish what we started, we need to elect Tom Wolf as governor of Pennsylvania,” the first lady told the crowd.

Wolf is leading Corbett in independent polls as the Democrat tries to break a four-decade tradition of Pennsylvania governors winning a second term.

Corbett is Pennsylvania’s former two-term attorney general from the Pittsburgh area. Wolf ran his family’s York-based building products distribution business for much of the last three decades. Spending in the campaign is threatening to break Pennsylvania’s record of nearly $70 million, thanks in part to the $10 million that Wolf gave his campaign.

The first lady is burning up the campaign trail, making stops this month for Democratic candidates for governor or U.S. Senate in Florida, Massachusetts, Iowa, Michigan, Wisconsin and Illinois. The White House also says President Barack Obama will come to Pennsylvania to campaign for Wolf before the Nov. 4 election as part of a seven-state swing.