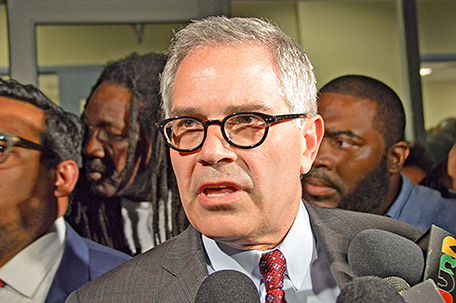 While District Attorney candidate Larry Krasner’s Democratic Primary win might be the most talked about, Rebecca Rhynhart’s victory over incumbent Alan Butkovitz is the most surprising.

By the end of Tuesday’s Pennsylvania Primary, Philadelphia’s political class found out in no uncertain terms that the only constant when it comes to politics in the Age of Trump is change.

Progressive candidates that wouldn’t come near President Donald Trump with a 10-foot pole ruled the day on Tuesday with Larry Krasner coming out on top to be the Democratic Party’s nominee for District Attorney and Rebecca Rhynhart besting incumbent Alan Butkovitz to win the party’s City Controller nomination.

In an election marked by low-turnout, Krasner, a longtime civil rights attorney, got 58,165 votes, or 38 percent of the vote, over his nearest challenger, former U.S. Attorney Joe Khan, who garnered 20 percent, or 30,994 votes. He will now face Republican Beth Grossman, a former longtime DA who oversaw the office’s Civil Asset Forfeiture among other departments, in the general election in November.

Having run on a platform that includes more putting more money into diversion programs, getting rid of cash bail for non-violent offenders and never seeking the death penalty in prosecutions, Krasner shared a moment many thought would never happen with a group of supporters that included Councilwomen Helen Gym, and Maria Quinones Sanchez, State Sen. Vincent Hughes, the Rev. Greg Holston, executive director of Philadelphians Organized to Witness, Empower and Rebuild, and fellow POWER member the Rev. Mark Tyler of Mother Bethel A.M.E. Church.

When he took the microphone in the courtyard of the John C. Anderson Homes in Center City, Krasner thanked his supporters, and reminded them that this was their victory too.

“[My supporters] are people who share a vision,” he said. “And that vision is of a criminal justice system that makes things better, that is just, and that is based on building up society rather than tearing it apart.”

While on its face that doesn’t sound scary, the combination of taking an anti-death penalty stance, making the demand for police accountability a centerpiece of his campaign, and supporters including Black Lives Matter-Pennsylvania and Occupy Philadelphia, make Krasner’s win a little bit of a concern for pro-law enforcement groups.

Current District Attorneys and police officers took to the media on Wednesday to share their consternation about Krasner’s win. Some didn’t know whether to laugh or cry. Others felt unsupported.

Calling Krasner’s supporters “parasites of the city” for voicing anti-police opinions, John McNesby, president of FOP #5, (Philadephia’s Fraternal Order of Police lodge), denounced the win and called on officers to remember that the Democratic nominee has never been on their side.

“My suggestion to the cops is maybe to pull over to the side of the road and call the District Attorney’s Office,” McNesby told the “Philadelphia Inquirer.” “Don’t do a damn thing because you’re not going to be covered. His election to that position would be catastrophic to the department and the community as a whole.”

At a press conference later that day, Krasner affirmed his support for free speech, even if it’s speech he doesn’t agree with. 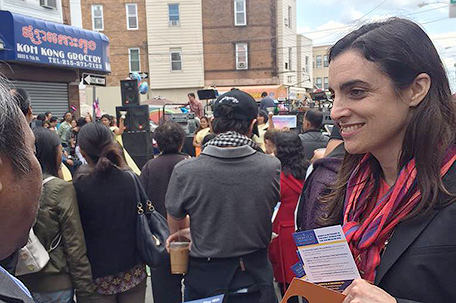 While Krasner’s victory was the most talked about result of Tuesday’s elections, the one no one saw coming was the Butkovitz loss.

Rhynhart, who resigned from her position as Chief Administrative Officer for Mayor Jim Kenney before she made her run, managed to ride an anti-establishment wave despite Butkovitz’s attempts to point out her city connections. She was backed by former Gov. Ed Rendell, Laborers Local 332 and a host of other group and organizations that had always endorsed the incumbent.

While grabbing lunch at the annual candidate’s gathering at the Relish restaurant on Ogontz Avenue, Butkovitz told those who asked that was confident about his chances because many of the people opposing him had done so in the past.

But in the end, Rhynhart beat Butkovitz decisively, taking 58 percent of the vote to Butkovitz’s 40 percent.

Rhynhart will now take on Republican Michael Tomlinson in November for the right to be the city’s next Controller.