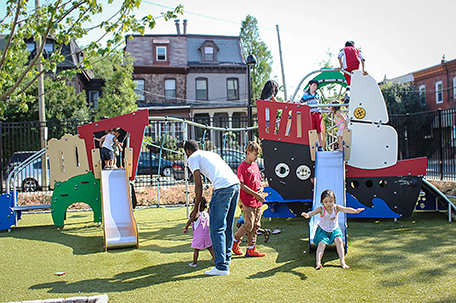 City Council wants to make sure that City of Philadelphia’s Rebuild program includes the city’s residents.

Thank you, Mayor Jim Kenney, for making diversity an important part of the City of Philadelphia’s Rebuild program.

But if you don’t mind, City Council would like to make sure that the 40 percent diversity and inclusion that you’re proposing actually comes to pass by giving you a few suggestions.

Last Thursday, Councilwoman Cherelle Parker proposed a resolution that would give Mayor Kenney and the administrators of the Rebuild program a roadmap to 40 percent that involves the School District of Philadelphia, the city’s churches and community centers and apprenticeship programs that would allow people with experience who aren’t in trade unions an expedited route to membership, and thus more employment.

Because Philadelphia’s Black and Latino communities seem to miss out when it comes to big City of Philadelphia construction projects, Parker and her fellow council members on the resolution—Jannie Blackwell, Derek Green, Mark Squilla and Maria Quinones-Sanchez—felt it was important to make the body’s feelings known.

“I, in no way, shape or form, view this as the all-encompassing silver bullet that will achieve what we hope and diversify the building trades and increasing the number of minorities and women that are doing business in the City of Philadelphia,” Parker said.

“However, you have to blame my 10 years of having to work in a highly charge, partisan environment in Harrisburg for the formula I’m accustomed to using when you are trying to achieve an affirmative outcome regarding a difficult issue,” Parker continued. “And the way to do that is to not wait until Rebuild is sort of unveiled and then criticize what we think is weak and/or wrong about that process.”

The resolution proposed by Parker highlighted several ways that the folks running the Rebuild program could ensure participation Blacks and Latinos.

By doing these things, there may be fewer cars with New Jersey license plates parked at construction sites, Parker said.

“I will tell you that we have all heard from Philadelphians that are frustrated when they see non-Philadelphians working on construction and development projects in their neighborhoods.”

So one of Parker’s other suggestions put forth in the resolution is to provide incentives for companies to use Philadelphians in their work and to partner with governmental agencies such as SEPTA and PennDOT to make sure that these workers can get to their jobs.

In other council news, the body approved the report of the Criminal Justice committee’s initial report. Among the recommendations included in the report is to provide GPS monitoring anklets to people who are out on bail.