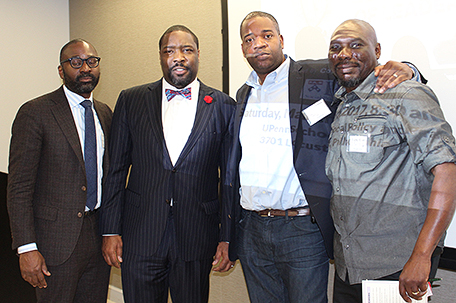 Saturday mornings are typically set aside for sleeping in, moseying out of bed catching up on T.V. programming missed earlier that week.  This was not the case for ambitious young Black men looking to break into the business world, and Philadelphia City Councilman Kenyatta Johnson
(D- 2nd District) gave them the platform to do this.

“Building the Bench: The Next Generation of Leaders,” was an all day program housed at the University of Pennsylvania’s campus in the School of Social Policy and Practice focused on the progression of Black men from a business perspective.  From 9a.m. to 3p.m., the day was filled with Black men from all areas of business telling their stories of success and sprinkling seeds of advice into their lighthearted conversation.  The sessions were titled “Educate, Encourage, and Empower” as young brothers were encouraged to ask questions, exchange business cards, and have conversations centered around fellowship and partnership as “big things happen in groups.”

Councilman Johnson is proud he has a platform available to bring young men this type of forum, as it is an initiative dear to him for many reasons. He was once a youth in Philadelphia much like the men he is seeking to help.  “As a young man growing up in South Philadelphia and a first generation college graduate being the first African American to represent the second council district in city council as well as a State Representative, I would not be here if it wasn’t for other African American leaders men and women who took me under their wing and saw some things in myself that I didn’t necessarily see. I’m a firm believer that when you reach a certain level of success as an African American, you have a responsibility to pay it forward.”

He is not alone in this thought process, as the councilman was joined by director/producer Jamal Hill (Brotherly Love, Streets), PA State Representative Jordan Harris (D- 186th District), Al Butler, Charlie Mack, Bennett Lomax, Serigne Fall, Ryan Boyer, Dr. Wayne Williams and many more who echoed this sentiment throughout their discussion of breaking into their respective industries.

Author Malcolm Evans came from New York City to promote his book entitled “Each Other’s Back A Young Black Man’s Strategies for Getting Ahead.”  Familiar with Philadelphia (he went to UPenn as an undergrad,) “Each Other’s Back” took him 11 months to write, and he decided to self-publish, so he has lots of experiences to share with young men trying to navigate life to the best of their abilities and streamline their success.  “I found that I was mentoring a lot of Black male Ivy League students, and those aren’t the people who need the most help.  The book is a way to reach beyond my own personal reach and personal network and really touch those who might need the most help. so that’s why I wanted to write the book.”  Be on the lookout for more information on this young brother.

Councilman Johnson stressed that economic social justice is a key component to “Building the Bench,” as youth shouldn’t ever be faced with difficult decisions based on their financial situations. “We need economics to address the issue of poverty that make sure that young people have the opportunities to follow their goals, dreams, and aspirations, and not trying to figure out if they should either sell drugs or go away to college,”he said,

This event was successful beyond measure and one the Councilman and his staff are working to make an annual occurrence, as feedback from youth in attendance was valuable and appreciated.  As for upcoming events, the Councilman has an initiative of the same kind planned for women on Friday, March 31 at City Hall titled “Women on the Move,” just in time to wrap up Women’s History Month.  We look forward to reporting the success stories of the young persons who have attended these workshops, because their future is now.