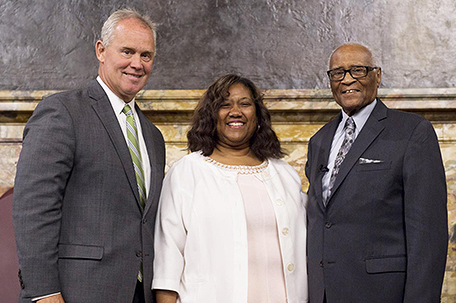 HARRISBURG – The Pennsylvania House of Representatives on Monday adopted a resolution (H.R. 930) authored by Rep. Vanessa Lowery Brown, D-Phila., which honors Herbert P. “Herb” Douglas Jr. as the oldest living African-American Olympic medalist and commended him on a lifetime of athletic, professional and philanthropic achievement.

“Born in Pittsburgh, Mr. Douglas was raised to persevere no matter the hardship. Capturing a bronze medal for the long jump at the Games of the Fourteenth Olympiad in 1948 was just one of many accolades awarded to him,” Brown said.

“Among his other achievements, Mr. Douglas was one of three African-American men to be the first in history to play football for the University of Pittsburgh. He was also among the first five African-Americans to obtain an executive position with a major corporation.

“Over the decades of his service, Mr. Douglas has remained a great influence and encourager of generations of Americans. From children striving to attain Olympic glory, to young people toiling to climb the corporate ladder, his example shines true.

“At 96, he remains as active as ever. He still swims 20 laps every other morning at his community living center, where he lives with his wife Minerva, who joined us in the House chamber.

“His mantra: ‘analyze, organize, initiate and follow through,’ helped him become one of Pennsylvania’s greatest athletes and philanthropists. His wisdom and encouragement certainly deserves to be celebrated and forwarded for many years to come,” Brown said.