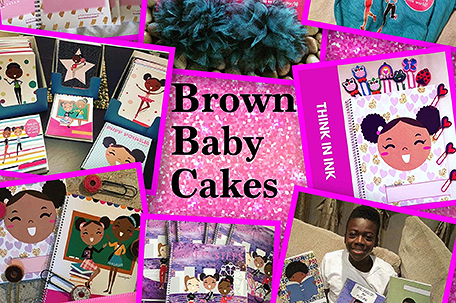 When her friend and mentor Nicole Harding asked Loresa Daniel to take over her business Brown Babycakes when she relocated from South Jersey to Rhode Island, Daniel saw it as both a challenge and a unique learning opportunity for both herself and her two young daughters.

Harding started the company, which specializes in motivational products geared toward children of color, after noticing a lack of representation in that department.

“[Harding is] a trainer, and as a trainer she travels the country quite extensively,” Daniel said. “There was a lack of positive, brown faces for children to see their own reflection in. … she decided to use a tool that would be connected to education because that’s something that she values.”

“She would bounce ideas off me, like, ‘how do you think this face looks?’ or ‘what do you think I should use for this background?’,” Daniel continued. “I feel like we were partnered from the beginning.”

In addition to this running this venture, Daniel is also a professional business trainer, which is how the two women first met. They still speak several times a week.

“I consult her on the next moves we make to expand the business and she helps me kind on staying focused, staying motivated, to keep going, some of the obstacles I could expect, and processes,” she said.

What is most important to Daniel is the exposure to those entrepreneurial processes for her children.

“I tell people all the time that we don’t really do this for money — I do this as a learning experience for my daughters to [help them] to be of the mindset to be entrepreneurs and know that they are capable of running a business, as well as to see the public’s reaction,” she said.

The feedback she has received from customers since taking over Brown Babycakes has been outstanding, Daniel said. The characters featured on their products really resonate with people, especially children of color.

Brown Babycakes currently offers a selection of notebooks, hair accessories they’ve dubbed “power puffs,” day planners and children’s tee shirts featuring their clever designs of little girls and boys in varying shades of brown, sporting natural hairstyles and performing different actions such as dancing, reading and running. Some also have a motivational message like “Focused on my future.”  They even have one design with a little girl with a hijab and message board which proudly reads, “Happy girls can do anything!”.

The product line is expanding to include more tee shirt offerings — a greater variety including adult sizes — water bottles, 16 oz. tumblers, hats, and reusable canvas shopping bags. She is also working with another designer to create Brown Babycakes-themed pillows. They are currently looking to expand their offerings for boys as well.

Although the new additions are soft launch items, if they sell well, she hopes to eventually add them to her website.

“Some of these items will be [available] for a limited time, and will be exclusive to when I go to vending events,” she said.

While Brown Babycakes mainly participates in Philadelphia and South Jersey-based vending events, they hope to expand their footprint in the region and beyond.

When it comes down to it, representation matters, Daniel said.

“When we go to different events, I feel like it exposes my daughters to what their future could be when I see other entrepreneurs,” she said. “Recently, we went to a women’s empowerment summit, and it was just powerful to hear my daughter’s recite their mantra, so to speak, and for them to see other professional women and even for adults to be impressed by how they carry themselves, how they’re business minded at such a young age.”

Daniel’s’s 10-year-old daughter Anais — who was present during the interview — proved that the professional business exposure is working.

“I think it’s really good to see and learn about all the things that we learn when we go to events,” she said, as her mother and her 7-year-old sister Issa nodded in agreement. “They’ve inspired me to become a fashion designer.”