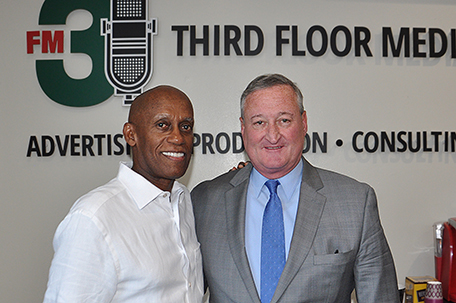 Gary Shepherd is considered a pioneer in the annals of Philadelphia broadcasting. Armed with over 40 years of experience and a lifelong passion for the medium, he launched 3rd Floor Media, a state of the art electronic media production company and advertising agency.

What propelled Shepherd to achieve this level of success is a simple, but straightforward mantra: “In the end you must become so good you can’t be ignored.”  While he believes it is important to share one’s business passion and success, he also believes it even more important to share the components– especially the trials and tribulations– of that business success with aspiring entrepreneurs.

Most radio listeners in the Delaware Valley remember Gary Shepherd as a morning and afternoon drive-time personality. However, he wore many hats in the industry —news director, music director, and program director —in an industry that has evolved with the advent of fast-changing technology, since his first job at a Detroit radio station nearly 40 years ago.

Besides the prestigious honors and awards received from congressmen, governors, state legislators and Philadelphia city officials ranging from mayors to City Councilpersons, Shepherd is proud of the notice received from community groups and his professional peers.

He is most proud of an accomplishment he achieved while at WDAS-FM when he achieved the largest radio share of the age 24 to 35 listening group in the station’s history with a share of 8.7 percent.

“What it taught me was not to rest on my laurels,” said Shepherd, who learned that “even being at the top of your game” did not insulate him from the changing business strategies and technology. “Even when you are your best there can be changes and the desire for industry managers to opt for a different direction,” he added.

But the changes in the industry were always viewed by Shepherd not as problems but as opportunities. “It was then I began assembling a small in-home studio and taking on small media projects. I knew owning my own business was the way to go,” he recalled.

With the help of his wife Lisa, who works in all facets of the business, Shepherd acquired a modest building in the West Oak Lane section of Philadelphia, and transformed it into a first-class production studio with multi-media capabilities.

3rd Floor Media’s presence in the neighborhood has led to community involvement. “It seemed like a small project, but we were able to transform a small area park that was unkempt and a blight to the neighborhood, “said Shepherd.

The park was renamed Triangle Park and with a little help from the neighbors trash was removed and the area was landscaped. It has become a source of pride for area residents as Mayor Jim Kenney and scores of politicians that included City Councilwoman Cherelle Parker and State Rep. Dwight Evans, a congressional candidate in the upcoming November 8th election.

Shepherd was motivated to define his vision for success. He not only knew what kind of organization he wanted to lead; he also knew what type of leader he wanted to be. “I knew success for me would be achieved by pursuing excellence,” Shepherd said. 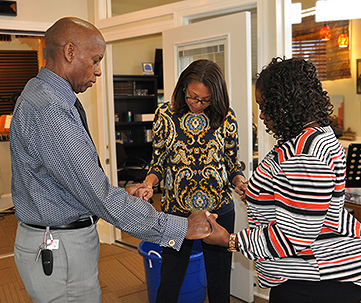 Shepherd and his staff have prayer over the new business.
Photos courtesy: 3rd Floor Media

Like many small business entrepreneurs, Shepherd’s day job was bolstered by his part-time job in a small in-home studio that offered radio and media production and serviced a few small accounts.

The studio was located on the 3rd floor of his home and, with some playful teasing from friends about the pint-sized studio on the 3rd floor, the company’s name, 3rd Floor Media, was a no-brainer.

3rd Floor Media has become a state of the art electronic media production company and advertising agency.  Founded in 2005, it has a client list of “Who’s Who” of corporate companies, government and major non-profit organizations.

When Shepherd and his wife Lisa are not working, they spend their time pursing community projects or gardening.  In his more leisure time, Shepherd studies the piano, sings and contributes to his church’s music ministry as its main drummer. He also assists with the choir and the church’s worship teams.

“Deep work is the process of becoming successful, Shepherd said. Reflecting upon his experience and the evolution of 3rd Floor Media he said, “It requires hard work and intense focus and pushing your skills to their limits.”

As Shepherd plans for the future he will, no doubt, push himself to ensure that 3rd Floor Media will become one of the best media companies in its field. He also will set goals and use them to evaluate its growth. The outcome will be a firm recognized for exceptional services.

And in the long run, Shepherd is hopeful his business journey may guide aspiring entrepreneurs.  “With a shared set of guidelines, I hope the compilation of my experience, from concept to launch, will help them the necessary take steps toward business success.”

How to launch your own business, tips from a serial entrepreneur