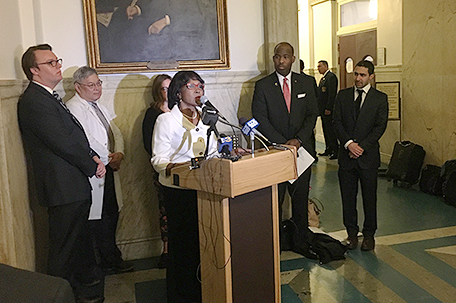 ABOVE PHOTO:  Philadelphia Councilwoman Blondell Reynolds Brown (D- At- large) speaks at the podium at City Hall as Councilman Derek Green (at right) and representatives from PennEnvironment Research, Moms Clean Air Force and other officials listen during the press conference about Philadelphia’s problem with air pollution.  (Photo courtesy: Arlene Edmonds)

The ladies of Moms Clean Air Force knew that Philadelphia had smog and pollution problems for years.

Just ask Gretchen Dahlkemper of Southwest Philadelphia. Five years ago, her then 2-month-old baby was rushed to the hospital with a severe asthma attack because of the city’s poor air quality.

Dahlkemper was among those who spoke at a PennEnvironment Research & Policy Center news conference recently. She was joined by Dr. Walter Tsou, executive director of Philadelphia Physicians for Social Responsibility and Dr. Ned Ketyer, a local pediatrician and member of the American Academy of Pediatrics Council. They were among those discussing the news that Philadelphia has the second smoggiest air along the Northeast Corridor.

“The impact of having poor air quality impacts the lives of the people in this city,” Dahlkemper said. “We have many contributing factors. We have high traffic. Since I live near the airport, that influences it. We have one of the largest refineries in Philadelphia that is still another source of the things that affect us.”

“But, I believe in being positive,” Dahlkemper continued.  “I think parents who bring a child into this world, who will live here for maybe 80 years have to optimistic. We know that Donald Trump is rolling back all the safeguards, and we know that our families are already exposed to terrible air. I believe that we can turn this around by putting pressure on the state and local governments and keeping the heat on in Washington.”

The recent PennEnvironment report said that Philadelphians had 97 unhealthy air pollution days in 2015. Although the city’s air is less polluted than it was 30 years ago, the rates are still high enough to contribute to major health problems for local citizens, Dr. Tsou said.

“These levels are injurious to our lungs,” Dr. Tsou stated. “It will compromise the breathing of those with respiratory problems. Ninety-seven days of smog and 212 days of elevated particulate matter in the air around Philadelphia is too high.”

“Physicians, like myself, have observed first-hand the adverse effects of poor air quality on the health of our patients,” Dr.Ketyer added. “Especially the ones among us who are the most vulnerable – infants and children, pregnant women, the elderly, and the poor.”

Ash Khayami, a campaign organizer for PennEnvironment, explained that even though the entire region is affected by the poor air quality, there are also “hot spots.” These hot-spots can be as small as a four-block radius in an inner-city community next to the expressway, or in close proximity to a manufacturing plant. This is often the case in low-income neighborhoods, according to Khayami.

“It’s a known fact that when you have a high concentration of buildings or skyscrapers that the area is hotter,” Khayami said. “The warmer the area is, the more smog and soot you have. The heat is only exasperated when local residents live near high-traffic areas or plants. These things decrease the air quality.”

“This is really a public health issue. It actually affects the economy. When you have high levels of smog, there are more children with asthma. These children are often out of school more days. Someone in the family may also be out of work for that day causing it to affect the pocketbook and psychological well-being. So, this is more than just a health issue,” Khayami stated.

He added that PennEnvironment considers it a “big blow” that Philadelphia’s City Council placed a moratorium on electric vehicle parking permits. They also are afraid of the ramifications of the executive orders President Donald Trump has recently signed rolling back EPA guidelines and Clean Car Standards.

“We applaud Senator Bob Casey and Councilwoman Blondell Reynolds Brown for continuing to be an environmental champions,” Khayami said. “We are working to ensure that state air standards and safeguards, as well as clean car standards, are not rolled back.”

Additionally, groups like Moms Clean Air Force are determined to challenge policymakers and the business community to reduce Philadelphia’s smog. Many locals are gearing up to attend the April 29th Climate March in Washington, D.C.

“We are also going to participate in World Asthma Day on May 2nd. We deserve to have clean air,” Dahlkemper said.

If you want to join Moms Clean Air Force in the fight for clean air, please email Dahlkemper at [email protected]