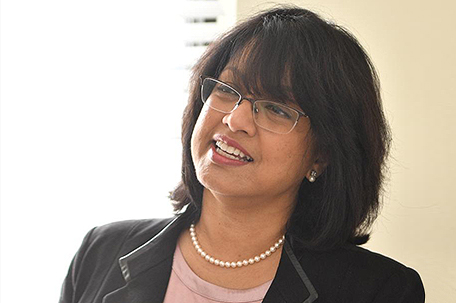 Nina Ahmad is hoping to make history by becoming the first person of color to win statewide office in the Commonwealth of Pennsylvania.

Question: The only person of color to hold statewide office in the Commonwealth.

Answer: “Who is Tim Reese?

But despite having candidates of color with all sorts of name recognition — Pittsburgh Steelers Hall of Famer Lynn Swann ran for governor as a Republican a few years back — it’s been easier for a camel to get through the eye of a needle than it has been for a person of color to get elected to statewide office.

But after 233 years of that being the reality, a person of color is going to finally be elected to a statewide office in Pennsylvania come November.

The office will be auditor general, and the officeholder will either be Tim DeFoor — a Black Republican who is currently Dauphin County controller —or Dr. Nina Ahmad, a former deputy mayor in the Kenney Administration and former president of the Philadelphia Chapter of the National Organization for Women.

While the odds aren’t as bad as they usually are for people of color this time, the fact that Ahmad is a woman of color means she has not one, but two uphill battles to fight. In 2016, the only two Democrats that didn’t win statewide in Pennsylvania were women.

It’s a fight that Ahmad said she’s ready for.

“I’m battle tested,” she said. “I was in a contested primary where my opponent [former Pittsburgh City Controller Michael Lamb] had endorsements from all of the men in our city. Mayor Kenney endorsed him, the Democratic City Committee endorsed him, but I won 71% of the vote in Philadelphia.”

“People are paying attention to your character, not just who you are,” Ahmad continued. “I want to take that same energy and reach voters by coming to them from a grassroots perspective that builds solidarity. That’s missing from top-down campaigns. I don’t believe in that.”

The SUN sat down with Ahmad and talked with her about what made her decide to take on the challenge of making history statewide, what she hopes to do should she win the office and how campaigning during a pandemic actually worked well for her.

SUN: Thanks so much for giving us some of your time today. I guess my first question is, what made you decide to run for the office of auditor general?

NA: I was the deputy mayor for public engagement for Mayor [Jim] Kenney. I left the Mayor’s office because I felt we needed real change and change seemed to be too incremental there. I found out that the auditor general was serving his last term and thought that this could be a real platform for change. This office advocates for public dollars and is an independent voice. That made it really attractive. How do we use public dollars to move things forward while keeping people engaged?

SUN: Talk a little bit about your previous experience and how you think you’ll be able to us it as auditor general.

NA: I bring a broad range of experiences to the table. I own a small business, so I’ve had to operate in a small business environment, which means I’ve had to figure out how to leverage dollars to do the most good. I was also a member of the National Advisory Commission on Asian Americans and Pacific Islanders, so I got to see how policy was formed. If you have no representation, you can’t have a say. I’ve had a seat at the table.

With the exception of Barbara Hafer, who was a nurse, many of the people who have held this office were lawyers. I’ve worked with [Certified Public Accountants] and know how audits work. This is a leadership job and it’s about managing the focus of these audits.

SUN: Is there anything new you’d like to bring to the office?

NA: The reason why audits are so important is because of the information they provide and how that information is used to determine policy and where resources go. An example of this is Act 102, which protects nurses from being forced to do overtime. The office talked with health care workers to make sure it was being implemented properly, that it was useful, and that if there are tweaks to be made, we can make them.

I want to create a Data Office, so that we can have information that we can then pass on to the legislature to get things done. One of the things this office would handle is pandemic preparedness. Gov. [Tom] Wolf and Dr. [Rachel] Levine [Commonwealth Health Commissioner] have done a great job managing COVID-19. But the data in this office would be multifaceted. It would look at health issues, educational issues, economic issues and all of the different sectors we have to think through. We’ve had pandemics before, but we’ve never been impacted in this manner. The state needs to have this information at our fingertips. It’ll include the best practices from this pandemic combined with best practices from other pandemics. It’ll also allow us to check the status of things like where we are with [personal protective equipment]. Are we replenishing and replacing things that are running out? How are the dollars being spent?

We would bring everyone to the table; public health officials, doctors, epidemiologists, survivors, businesses, students and the unemployed to figure out how the pandemic affected everyone and how we do better next time.

SUN: This isn’t your first time running for a statewide office. You ran for lieutenant governor in 2018 and came in second to the eventual winner, John Fetterman. You also ran for the seat that Congressman Bob Brady held before it was redistricted out of existence. Through those experiences, you’ve probably seen just how tough it is to run for statewide office without the pressure of a pandemic hanging overhead.

What was the experience of running for office like this time around? How, in other than the obvious ways, was it different?

NA: The telephone, social media and Zoom came into play. Usually, you go into a town and the town officials open doors and introduce you to people. You do a town hall with all of the other candidates and you get to answer maybe one or two questions from the audience. This time, because we were doing town halls on Zoom and people could go into the chat room, I got to answer a lot more questions and people could talk to me directly. People also took the time to send questions via email. It allowed me more time to connect with voters. People seemed to be paying more attention.

We had a lot of models that looked at the ways we could win. We even had a model that accounted for depressed turnout. But the problem with all of the models is that they didn’t take into consideration the combination of a global pandemic and the civil unrest that came with the death of George Floyd. But we were cautiously optimistic. When I ran for Lieutenant Governor, we had four people running from Southeastern Pennsylvania and it divided the vote. I’m the only person from this area this time and that’s where a large segment of the vote comes from. We had 32% of the vote between in-person and mail-in ballots.

SUN: This year, no matter what happens, the Commonwealth’s executive offices will have a person of color in them and that person will be the auditor general and the first one elected to office in 233 years. In 2016, the only Democrats that lost their bids for row offices were women.

What does that mean to you, especially now?

NA: Communities of color are very aware. These are people who understand what a boot on your neck is all about. They have had a boot on their necks for 400 years. As an immigrant, I came from a place [Bangladesh] that understood that people will fight for freedom and will continue to sacrifice for freedom. If we don’t have a seat at the table, marginalized people will continue to be marginalized.

SUN: Now that the Commonwealth appears to be opening up, will that change your strategy when you take to the trail for the November elections?

NA: We’re planning some in-person events for July. We’ll be in Harrisburg soon, and we’ll also be going to Lackawanna, Luzerne and the rest of Western Pennsylvania. We’ll also have some fundraising trips. I’m cautiously optimistic, but I also know I have to put in the work. If Democrats turn out, we win. If we can make sure that 800,000 Democrats come out to vote because they see themselves in what I’m trying to do, we’ll win.

You asked me how I won earlier. I won because authenticity is critical. Whether I’m talking to a group of adults or a group of children, authenticity is critical. People can smell a phony from a mile away. It’s like being a parent. If you tell your children to do something, they may not always agree with you, but they’ll understand it if you can explain your reasoning. Respect is so important. We have to remember that the people we serve are our bosses.

SUN: Thank you so much for your time.