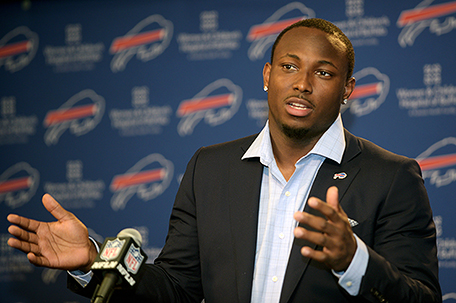 Well, Buffalo Bills running back LeSean McCoy will be able to go to two-a-day workouts in August without the specter of a court date in Philadelphia hanging over his head.

In a news conference held on Monday, April. 3, Philadelphia District Attorney R. Seth Williams announced he wouldn’t be bringing charges against McCoy in connection with a Feb. 7 fight at the Recess Lounge in Old City. Two off-duty police officers were injured in the fight.

After an investigation that took several weeks, Williams decided based on the evidence that there was a little too much reasonable doubt to take this case to court.

“Looking at the events and the actions of all parties on Feb. 7, 2016, there is insufficient evidence to prove, beyond a reasonable doubt who started the fight and under what circumstances,” Williams said. “In order to gain a conviction against any individual, the District Attorney’s office would have to prove beyond a reasonable doubt that any actions taken were not in self-defense or in the defense of another.”

While the fight itself is up for dispute, what led to it isn’t, Williams said. There were two groups—McCoy’s group and the group with the two off-duty officers—bar hopping around Old City on Feb. 7. They connected in the VIP section of Recess Lounge

There was a special on $350-a-bottle champagne. If you bought three bottles, you got one free. The group with the two policemen bought that package, while McCoy’s group bought one bottle of champagne, a bottle of Hennessey, and two other types of liquor, Williams said.

A misunderstanding about the champagne caused the fight, a fight that no one could agree on, said Deputy District Attorney Michael Berry, one of the DAs working on the case.

“The only two people who could say how the fight started had conflicting accounts,” Berry said.

Officials from the Philadelphia Fraternal Order of Police were less than amused with Williams’s decision.

“In late March, a Trump campaign manager was charged with apparently grabbing a reporter by the arm in Florida,” Philadelphia FOP President John McNesby said in a letter to FOP members. “In New Jersey, an arrest was made in the video recording of an assault on a teenager. Yet, in Philadelphia, a vicious assault on off-duty police officers by a rich athlete and his friends goes completely unpunished.”

In fact, McNesby continued, it might be a good idea for Philadelphia Police officers to give Democratic National Convention protestors a wide berth since the District Attorney obviously doesn’t support them.

Williams understands why the FOP might feel that way, but his job isn’t to make the police happy, it’s to follow the letter of the law.

“This isn’t like a movie,” Williams said. “We have to go where the evidence takes us. I talked with Commission [Richard] Ross and he understood our evidentiary issues. It’s easier to make people happy, but I’m glad that we did the right thing.”

While McCoy may be out of the woods with the City of Philadelphia, he may still have to face the music with National Football League Commissioner Roger Goodell. The league’s investigation into the incident continues, sources say.