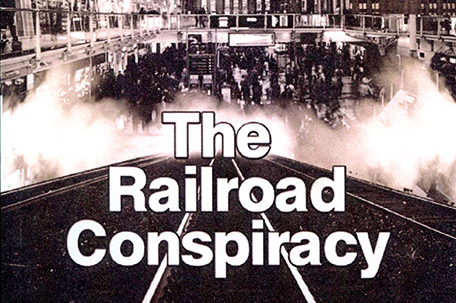 The Book: ‘The Railroad Conspiracy’

Based on a True Story

Available: CreateSpace.com (the Amazon Company) directly and as an eBook on Amazon Kindle (Kdp.com)

The daily rail commute may be daunting for many. Typically passengers wait for trains, hoping they are on schedule, and listen half-heartedly for announcements updating their train’s status.

However, there was a time when Philadelphia commuters heard the smooth, baritone voice of train caller Glenn D. Lewis. His then daily performance earned him the title “The Voice”. Today, over five decades later, when engaged by Lewis, his voice still evokes the thoughts of a professional radio announcer or performance artist.

According to Lewis, now 75, there is a story behind “The Voice”, which he has worked years to tell. The story is now being told in the form of a recently published book, “The Railroad Conspiracy”, written by Lewis, with the help of ghost-writer Donald MacLauren, is about the alleged racism Lewis believes he experienced when he was a train caller for the trains that crisscrossed the old Conrail system.

In what Lewis refers to as his heyday, he recalls often being compared to the late sports commentator Howard Cosell. He admits he was a frustrated radio announcer who actually did study broadcasting for two years before his distinctive sonorous baritone voice appeared on a much different stage. But, it was a stage nonetheless—Conrail’s rail platform as a train caller.

The Consolidated Rail Corporation, commonly known then as Conrail, was the primary Class I railroad in the Northeastern United states between 1917 and 1999.

In the book, Lewis’ credits harassment by certain Conrail employees and supervisors due to “jealousy and racism resulting from the publicity and public adulation” he received.” It was this collective behavior, in Lewis’ estimation, that demonstrates what can go wrong when supervisors and coworker harass and interfere with their employees. He believed he was pressed out of his job at Conrail.

From Lewis’ perspective, “As I gained notoriety, my superiors became jealous.” He also contends that because he was African American, his white superiors and other executives started to attack him and accuse him falsely of misconduct. “My superiors began to reduce my job duties and responsibilities and publicly humiliate me when they could.”

Lewis points to the numerous newspaper articles that chronicled his performance and the respect he garnered from daily commuters. He specifically cites a story published in the Philadelphia Evening Bulletin on January 28, 1977, by the late columnist Rose DeWolf’s. She wrote that “they want to hear Glenn Lewis, though they do not know his name…You have to understand that your average train commuter is happy, even thrilled, to be able to hear what the train caller is saying at all. The sound system is the cavernous railroad stations of our land are not all the best. Sometimes it sounds as if the train caller are speaking right into their palms.”

DeWolf’s story also quotes then Stationmaster Frank Carr, who recollects his first memory of Lewis’ performance. “He starts off each day saying: ‘Good morning, people out there’. Carr says compliments have been coming in about Lewis. ‘He takes the drag out of waiting for a train.’ Funny how just one guy doing his job with a bit of extra gusto can make such a difference…can liven everything up.”

Despite the praise from commuters, some fellow workers and those local newspapers articles, Lewis’ employment with Conrail ended after nearly six years, in March of 1980. Lewis asserts that he was plagued by “unwarranted demotions, harassment, public humiliation, racism and eventually what I considered was an attempt on my life.”

For years, Lewis told others that he had a story to tell. In fact, he told his story to anyone who would listen. The manuscript contained all the elements of a great novel — part thriller, part mystery, with all the accompanying twists and turns — the narrative was his story, and he spent over 35 years bringing it to fruition.

“My side of this story had to be told. People need to know how a company failed an employee and his quest to right the wrong he experienced,” declared Lewis

When asked to address what could have been considered typical workplace conditions and personal interactions, Lewis offered the following, “Considering the number of difficulties that can unexpectedly arise from bosses, coworkers, and immoral conduct at work, an employee can be considered fortunate when his is working for a supportive and helpful company. In general, I hope that employers, supervisors, and coworkers do more to help and support their employees.”

The book’s dedication sheds light on its direction and Lewis’ hopes that his story will support anyone who has experienced what he believes he has:

“Dedicated to those who have had to suffer all forms of prejudice, harassment, and discrimination on the job.”

Glenn D. Lewis, a native Philadelphian, graduated from Edison High school in North Philadelphia, served in the U.S. Army. After leaving Conrail, he worked for two decades at the Philadelphia Water Department where he received several awards and commendations. He currently works part- time, and spends most of his time promoting his book throughout the Delaware Valley.

Book review: Gathering of the Waters by Bernice McFadden