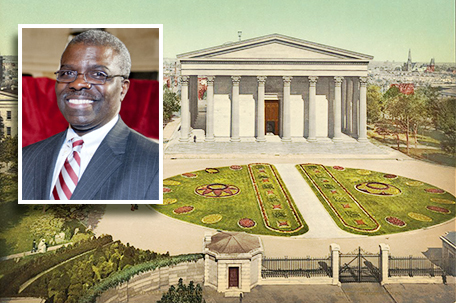 The Board of Directors of City Trusts announced on Wednesday, Oct. 4 that it has accepted “with deep regret” the resignation of Clarence D. Armbrister as President of Girard College effective on December 1st.

Armbrister, who has served as President of the historic boarding school in North Philadelphia since 2012, informed the Board that he will accept the Presidency of Johnson C. Smith University, an elite Historically Black College or University (HBCU) located in Charlotte, North Carolina.

Armbrister’s resignation comes as the Board prepares to launch a new strategic planning process under the auspices of its Girard College Committee, which oversees the school’s operations on behalf of the Board.  In the wake of today’s announcement, the planning process now will include a formal search for Armbrister’s successor. In his place, the Board announced the appointment of Girard’s Vice President, Ava Willis-Barksdale, as Interim President.

“The Board accepts Clay’s decision with deep regret,” said Board President Ronald Donatucci.  “Clay has done a tremendous job as President of Girard College, and we are grateful for his outstanding service to Girard and to the children of our city.  We will miss him, and we wish him the very best as he takes on this new role.”

“I am looking forward to this new opportunity, which is something I’ve always wanted to do, but this is bittersweet for me,” Armbrister said.  “I love Girard College and what it stands for, and I have been truly blessed to work with such an outstanding community of students, teachers, administrators, alumni, and the entire Girard Family.

“Girard will always hold a special place in my heart, and I will always treasure the memories that we made together here.”

An attorney and administrator who served in key roles for the School District of Philadelphia, Temple University, and as a mayoral chief of staff before his appointment as President, Armbrister began work on what became his signature achievement shortly after his arrival at Girard in July 2012.  Working cooperatively with teachers, administrators and staff, Armbrister guided a comprehensive academic restructuring of Girard College, including the development of the new Girard High School, to position Girard’s graduates for greater academic success in college and beyond.

“I have had the privilege – and it is a genuine privilege – to work closely with Clay Armbrister over the last five years,” said Board Vice President Bernard W. Smalley, chair of the Girard College Committee.  “He has worked tirelessly in leading the development of a new curriculum that is preparing our students to be even more successful in college and build lives as productive citizens.

“Through that work, it became clear that Clay has a passion for shaping young lives through the power of higher education, and JCSU offers a challenge that he just couldn’t pass up,” Smalley said.  “I know this much: JCSU is getting a great leader who is dedicated to the cause of helping young people use higher education to build successful and productive lives.”

“Clay has done an outstanding job of positioning Girard College for continued success for many years to come,” said Joseph Bilson, Executive Director of the Girard Estate, which administers the Girard Trust that funds the operation of the school.  “We look forward to continuing that work with Ava Willis-Barksdale, a talented educator and administrator whose experience and commitment to Girard’s students makes her an ideal choice to serve as Interim President.”