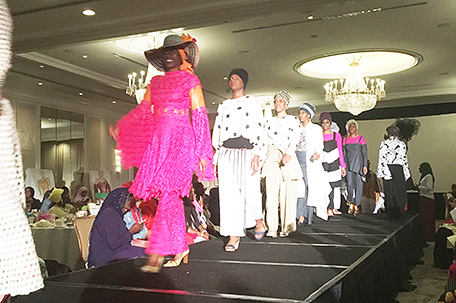 ABOVE PHOTO:  A group of models parading down the runway.  (Photo courtesy: Denise Clay)

The 20th Annual United Muslim Masjid Sisters’ Recognition Luncheon and Fashion Show — “Blossoming In Opulence” — had more than one interpretation.

The women gathered in the ballroom of the Hilton Hotel on City Avenue were staring in rapt attention as the models participating in the United Muslim Masjid Sisters’ Recognition Luncheon and Fashion Show walked the runway.

Models of all shapes and sizes wowed the crowd in outfits ranging from smart business suits to luxurious furs that mixed high fashion with the Muslim call for modesty. Pantsuits, dresses and loungewear in a variety of spring and summer hues were also featured. Some of the outfits even provided alternative head coverings and ways to wear the hijab.

At a table with a group of friends and relatives, Aminah Muhammad happily watched the festivities.

“I saw a lot of things that I liked,” she said. “[The show] had something for everybody.” 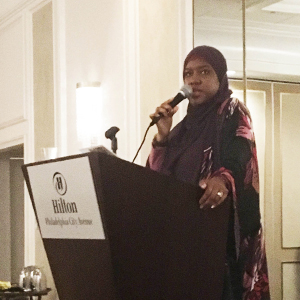 With the theme of  “Blossoming In Opulence: Turning Over The Land for a Field of New Dreamers,” the  annual event provided the women gathered there a chance to celebrate the next generation of Muslim womanhood while sharing a meal and spending time together.

In addition to the fashion show, the women heard from acclaimed author Umm Zakiyyah, whose “If I Should Speak” trilogy of books has been met with worldwide acclaim.

But it was the “New Dreamers” that took center stage to start the event. The group of young women —ranging from an 11-year-old author to an entrepreneur who created the hijabs that she and her friends wanted to wear — were recognized for their accomplishments during the event. 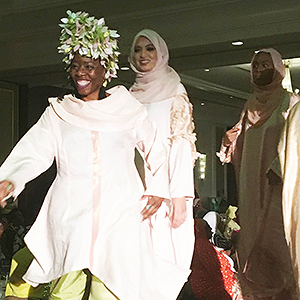 In addition, the late Naima Muhammad, the creator of the United Muslim Masjid’s Universal Muslim Weekend Madrassa, or Islamic school, was honored with the Gwendolyn Dawan Continuing Legacy Award and Nalijah Abdul-Karim was honored with the Faatimah Gamble Award, named for the founder of the Sister’s Recognition Luncheon and wife of Rock and Roll Hall of Famer Kenny Gamble.

When the last award was presented, it was time for the fashion show.

The show is a fundraiser for the Masjid’s youth programs including the group’s Summer Madrassa Camp.