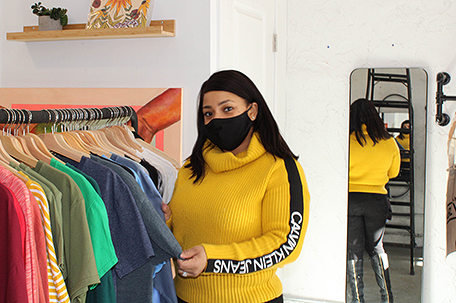 ABOVE PHOTO: Design Director Nevada Gray stands next to a rack of nice tops and blouses.  (Photo by Andre Smiths)

For 40-year-old store owner Kimberly McGlonn, it would be a dream come true if Grammy award singer Beyonce simply walked into her popular Grant Boulevard boutique and bought one of her beautiful dresses. No doubt, that alone would be a great experience McGlonn would never forget.

However, McGlonn has been honored by Beyonce in a whole different way — Grant Boulevard, McGlonn’s Black-owned clothing boutique, located on the 3600 block of Lancaster Avenue, recently won a $10,000 grant by Beyonce’s charitable organization, BeyGood.

Grant Boulevard was the only local business in the Philadelphia area to receive the prestigious grant out of thousands of applicants across the country. BeyGood partnered with the NAACP to help support small Black businesses during the pandemic. McGlonn first learned about the program after she saw it on the NAACP website.

As a BeyGood grant recipient, Grant Boulevard is featured on Beyonce’s website with their bio and picture displayed on a beautiful, colorful screen.

Channel 6 Action News also featured the store in a story two weeks ago.

“I was so shocked when I saw our picture on Beyonce’s website,” McGlonn said. “Beyonce is such a powerful woman. She’s an impressive singer. She’s clear what she cares about. And she’s been very thoughtful about everything she touches. The idea that she found value in our work shows she appreciates our work and cares about what we are doing.”

Through her work at Books Through Bars, a West Philadelphia nonprofit that has been sending books to women in prison for over 30 years, McGlonn began to understand the barriers that incarcerated women often faced when they are released from prison.

She had also visited many correctional facilities in order to help incarcerated women make plans for their future, helping them with their education and making sure they were prepared to return to the working world.

Before McGlonn opened Grant Boulevard last year, she had no background in fashion, but felt that it was her duty to help train women in prison and teach them about the business.

Once they passed the training program, McGlonn wanted to give them a chance to gain employment at her clothing store. She also wanted to point them in the direction of other fashion stores.

McGlonn has created partnerships through the city and has recently started a fellowship program to help incarcerated women who are interested in sewing and making clothes for a living. She has used fashion to create jobs for them. She’s currently working with the Department of Parole to keep a tight hold on the women.

Before owning a clothing store, McGlonn was an English teacher for 18 years in the Lower Moreland School District. Currently, she serves as a member of the Borough Council in Jenkintown. She earned her Ph.D. in Philosophy at Louisiana State University.

McGlonn is one super educated woman. She turned a vacant garage into a popular fashion store. The store is set up like a living room, with plenty of chairs and a sofa where people can sit and drink coffee.

Her radical clothing store caters to people of all colors. For many females, being in the store provides a sense of togetherness and unity that often leads to larger conversations about different fashions that are displayed on the floor of the boutique.

Before living in Philadelphia, McGlonn grew up in Milwaukee. She went to school on the city’s north side, where Blacks faced many challenges. That’s where she learned the importance of fighting for the rights of Blacks and.much of what she learned in Milwaukee is what she has been able to share at her clothing store.

Grant Boulevard creates edgy, bold and idiosyncratic garments. From sweatshirts and tees to runway styles, they stand a cut above the rest.

McGlonn believes what women choose to put on their bodies should make a fashion statement and should communicate their greater values, as long it’s done in good taste.

Her store reclaims fabrics and manufactures clothes to fit women’s bodies. Much of her clothing is crafted from second hand materials, often made from the scraps from big retailers.

Grant Boulevard doesn’t throw away anything; they don’t waste good material. The designers even use men’s wear and repurpose it to create all different fashions of clothing for women; it could be a cuff or stitching or an extra pocket. A large men’s shirt can be created into a fashionable dress for a woman as well. Another attractive piece they offer is a long architectural skirt made from denim scraps with a matching denim jacket that shows a picture of the Earth on the back.                                      All the fashions are handmade by McGlonn’s team of seven women designers that take vintage or used clothing as well as virgin fabrics and create stylish tops, bottoms, dresses, skirts, outerwear and accessories to fit all types of women. Because of the pandemic, Grant Boulevard has shipped clothes around the city and the world.

McGlonn and Nevada Gray — McGlonn’s director of design — handpick the garments and scrap that are in good condition. Along one wall in the studio are piles of men’s wear ready to be cut up and manufactured into women clothes.

Every garment must go through the hands of Gray before it leaves the studio. Gray oversees all the sewing and works closely with all the employees. She has been designing and making clothes for 20 years.

“We bring a lot of color to our clothes,” Gray said. “Everything tells a story. Everything is unique in that way. We play with a lot of colors. We just create. We name some things and then it becomes its own personality and persona.”

Soon McGlonn and Gray plan to expand their business to children’s wear. Gray says she will use her 3-year-old daughter to create fashion. From that point, the two women will make clothes for little children to wear.

Grant Boulevard will make plans for the children of the future. It’s a plan they know will bring great results, and believe Beyonce’ and her daughter, Blue Ivy, would agree.