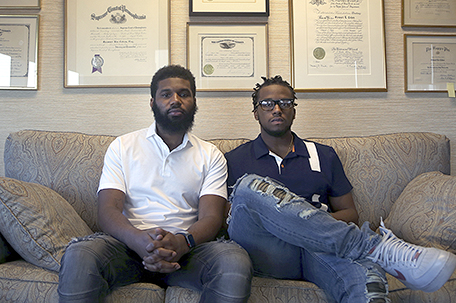 ABOVE PHOTO:  Rashon Nelson, left, and Donte Robinson, right, both 23, sit on their attorney’s sofa as they pose for a portrait following an interview with the Associated Press Wednesday April 18, 2018 in Philadelphia. Their arrests at a local Starbucks quickly became a viral video and galvanized people around the country who saw the incident as modern-day racism. In the week since, Nelson and Robinson have met with Starbucks CEO Kevin Johnson and are pushing for lasting changes to ensure that what happened to them doesn’t happen to future patrons. They are also still processing what it means to have had an everyday encounter escalate into a police confrontation. (AP Photo/Jacqueline Larma)

Two Black men arrested for sitting at a Philadelphia Starbucks without ordering anything have settled with the city for a symbolic $1 each and a promise from officials to set up a $200,000 program for young entrepreneurs.

The men’s lawyer and Mayor Jim Kenney outlined the agreement to The Associated Press.

The arrest of Rashon Nelson and Donte Robinson on April 12 touched off a furor around the U.S. over racial profiling.

They were led away in handcuffs after the manager called police, saying the men refused to buy anything or leave. After spending hours in jail, they were released and no charges were filed.

The men said they were waiting for a business meeting about a potential real estate deal.

Starbucks CEO Kevin Johnson came to Philadelphia to personally apologize. He also announced Starbucks stores would close May 29 for training on bias.