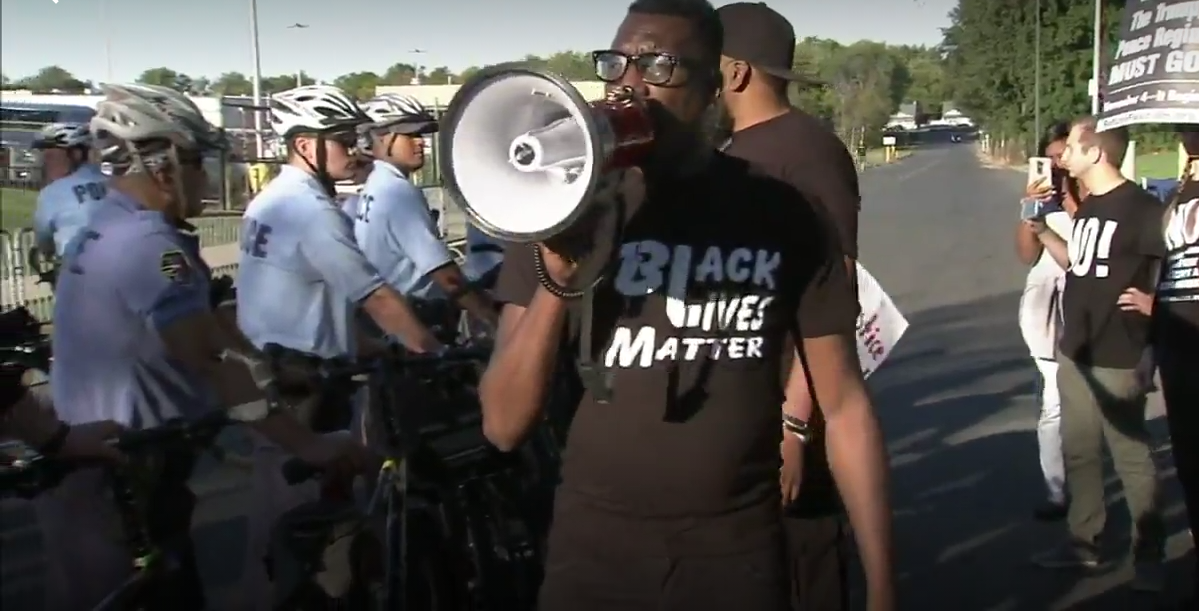 NBC10–A group of protesters gathered outside a Philadelphia Fraternal Order of Police fundraiser for a suspended officer who fatally shot a man in the back during a traffic stop.

During Sunday’s fundraiser, about a dozen members of Black Lives Matter Pennsylvania as well as the Justice for David Jones Coalition protested outside the FOP building.

“Our dear brother David Jones,” Black Lives Matter Pennsylvania leader Asa Khalif shouted via loudspeaker during the protest. “A man that was loved by his family, his friends, and his community. You shot him in the back! And he’s dead! And now you have to deal with the consequences! Now you throw a party! You’re celebrating killing black people!”

During the protest, more than 30 officers stood outside the FOP Lodge and set up a barrier around the building.

Pownall, a 12-year veteran of the police department, shot David Jones, 30, in the back and buttocks following a struggle back on June 8. Jones later died from his injuries.

Surveillance video shows Jones running away as he’s shot. He was stopped for riding a dirt bike on city streets, which is illegal, and police say he reached for a weapon during a scuffle with Pownall.

After an investigation, Philadelphia Police Commissioner Richard Ross announced in September that Pownall was suspended with intent to dismiss.

“There were serious policy violations that were committed — ones that were on video,” Ross said during a news conference. “It’s not even a question of what someone’s perception was versus another’s. I saw it. The shooting investigators saw it. And that’s where it starts and stops.”

Ross said Pownall’s first attempt to shoot at Jones was justified under department policy, because it happened right after the struggle with a weapon.

Pownall’s gun jammed, and as he fixed it, Jones dropped his gun and fled. He was at least 10 feet away and had his back turned to Pownall when he was shot, Ross said.

While Pownall was suspended, he has not been criminally charged.

Several groups have protested in the weeks following the shooting. In July, protesters marched on the Police Administration Building and City Hall demanding a larger investigation. In August, dozens of activists protested outside of Pownall’s home in Northeast Philadelphia and called for his firing and arrest.

During a police rally at the FOP Lodge 5 headquarters on August 31, FOP President John McNesby referred to the activists who protested outside Pownall’s home as a “pack of rabid animals.”

“When you go to work each day, you shouldn’t have to worry that a pack of rabid animals will suddenly show up at your home and openly threaten your family,” he told the gathered crowd of a couple hundred people, according to WHYY.

McNesby went on to describe the protesters as “racist hate groups determined to instigate violence.”

“We’re not going to dignify that with an answer,” Khalif said. “That ridiculous comment doesn’t deserve a response. I’ll simply say, ‘Justice for David Jones.’”

“Referring to black people as animals has a long, painful history in this country. Fighting divisive words with divisive words gets us nowhere,” he told Philadelphia Magazine.

McNesby responded that he never referred to black people in his remarks, and had no idea if protesters were black, white or Asian.