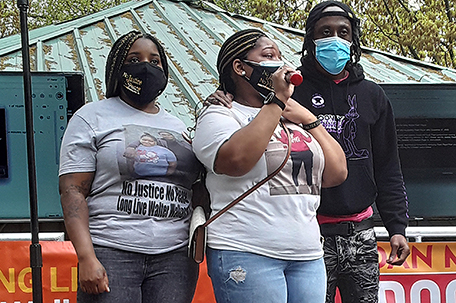 On October 26, Wallace was caught up in the middle of a mental health crisis. He was visiting his parents’ house on the 6100 block of Locust Street, but on that day, something went wrong. His family made frantic 911 calls to police asking for help. Family members pleaded for the police to come to stop Wallace from attacking his parents. Screams could be heard in the background of those calls.

It was the third time that day that police had responded to the house in the Cobbs Creek neighborhood.

When officers arrived at the house, Wallace was holding a knife in his hand; he started walking towards police. Meantime, his mother who was standing outside, was trying to calm him down. But less than a minute later, officers Sean Matarazzo and Thomas Monoz opened fire on Wallace, gunning him down on the street. He died in his mother’s arms. The shooting was caught on video by a bystander. There was also bodycam footage of the shooting which was later released by Philadelphia Police.

Since that day, Wallace’s family has filed a wrongful death lawsuit against the two officers who opened fire on him that day. The lawsuit, filed in Common Pleas Court, accuses both officers of using unreasonable force when they shot Wallace more than a dozen times outside his family’s home. Also, a separate lawsuit will be filed against the city in federal court, alleging that inadequate police training and failure to equip the officers with tasers led to Wallace’s death. Some people say police should have shot Walter Wallace Jr. in the leg, but police say that wasn’t an option.

So nearly six months after Wallace’s death, members of Black Live Matters organized this rally to celebrate his life. There were tables of free food, books and clothes offered by local organizations around the city. There was even a bouncy house for the children. Dominique Wallace, Walter’s wife, said she wanted Sunday’s rally to reflect her husband’s love for life.

Event organizer Krystal Strong along with her partner, YahNe’ Ndgo, made sure the rally didn’t miss a beat. Before everything started, they led a group of marchers into Malcolm X Park. Once the stage was set, Ndgo grabbed the microphone and with a big smile, introduced herself to the large crowd. After a number of people talked on stage, Ndgo introduced a music video that was recorded and produced by Walter Wallace Jr. The video was called “Black Hearted,” and it called attention to police brutality in the Black community.

The video was mainly made in response to the killing of George Floyd. The crowd watched the video and gave it an overwhelming applause. Ndgo said people might know about the moments before Walter Wallace was killed, but they should know who Wallace was as a person.

Wallace’s two sisters, Lakitah and Wynetta and brother John Brant stood on stage and spoke proudly about his life. They said they will keep on fighting until their brother gets justice. Wallace’s wife, Dominique, repeated the same message before she broke down in tears. His father, Walter Wallace Sr., asked the crowd to consider coming together more as a unified race of people.

“The only challenge we’re going to bear [is] if we stand together as all people,” he said. “Today, you have to look at all of us. It’s not just one race of people, but all of us. We deserve the opportunity to succeed and become better people. Don’t look at one, look at all of us. I say this because there are people who think we are unfit people. However, we got some unfit people in government agencies that [are] supposed to do for us. They can ‘talk the talk,’ but they can’t ‘walk the walk.’ There should be an opportunity for all of us. Not just one race of people. We are all human beings and we deserve to live just like anybody else.”

Last Sunday’s rally was also part of a three-day, multi-city event that called for the release of Mumia Abu-Jamal and Russell Maroon Shoatz. Both men were convicted of killing Philadelphia police officers and currently serving life sentences in prison. Abu Jamal’s grandson, Jamal Hart Jr. and l also spoke about how people in the Black community must come closer together. He believes the Black race needs more revolutionaries in the neighborhoods.

“We all need to do better, we all do,” said Hart. “We need to try our best to make sure this kind of stuff doesn’t happen again. We need to be better friends and be better neighbors. There’s a need for more revolutionaries. That’s the only way we’re going to get out of this hole. Right now, we can no longer trust the police. We are stronger than the police and the government. Today, we must stand strong as a race. We must do that. We are the strongest force on this planet.”

The rally ended on a peaceful note. Pam Africa, who is the head of the International Concerned Friends and Family of Mumia Abu-Jamal, made an appearance at Malcolm X Park. She greeted members of Walter Wallace’s family at the event. Many people don’t know this, but Pam Africa lives on the same block as the Wallace family. She witnessed Walter Wallace Jr.’s mother interacting with police after they fatally shot her son that day.

Members of Black Lives Matter in Philly plans to have more events celebrating the life of Walter Wallace Jr. Sunday marked the end of a productive and powerful week for them.