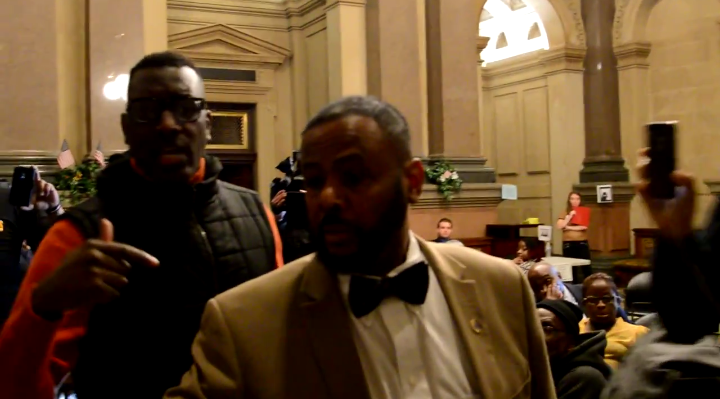 PHILADELPHIA (AP) — Activists disrupted a poverty lesson at Philadelphia City Hall, persuading a councilman who helped organize the event to instead go on a tour of one of the city’s poorest neighborhoods.

The surprise turn of events, in a city where more than 1 out of 4 residents lives in poverty, occurred as city council members and staff had gathered Tuesday in a gilded conference room to take on the roles of impoverished people applying for social services.

“We don’t need simulation here,” Black Lives Matter activist Asa Khalif said after grabbing the microphone, his voice then rising. “We can take you to those places where people are actually in poverty and actually would need help and assistance.”

And so he and two activists left, taking a train on a 20-minute trip from the center of Philadelphia to a blighted neighborhood where they heard from residents about people publicly injecting heroin, alleged police harassment and fatal shootings.

“This around here, this is the gutter where nobody wants to come and help people,” a 46-year-old street preacher named Chad Drayton told Jones just after the group stepped off the train. After their conversation, Jones hugged the man.

The group then walked down the block past abandoned homes and lots overgrown with long weeds, where chain-link fences kept piles of empty bottles and other trash from spilling out into the street.

John O’Bannon, a 64-year-old man who said he served as a Marine in the Vietnam War, stood outside his home and caught their attention. He told Jones about a murder around the corner from his home last week. And he said that police would force activists who come into the neighborhood to hand out food and other supplies to leave the block.

“They got to get out and see what’s going on down here,” he said.

Jones, who is from a different part of the city, was the only council member to go on the tour. The others stayed behind to take part in the planned “poverty simulation.”

As Jones spoke with O’Bannon, a woman walking by complained about men who sit near the train station and inject heroin into their necks.

Jones then stopped on the sidewalk a short distance away, near a row of beat-up sneakers apparently for-sale.

“We have to do better. We can’t just allow this,” he said. “It’s not a simulation. For these people, it’s real.”