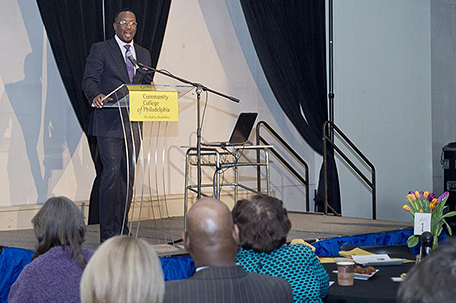 for Community College of Philadelphia

Community College of Philadelphia kicked off its African American History Month celebration on Wednesday, Feb.1, with a breakfast at the Great Hall. President Donald Guy Generals and Sulaiman Rahman, founder and CEO of Urban Philly Professional Network, related storied achievements of the past to emerging issues of today, like immigration.

With the Trump administration’s recent travel ban of seven predominantly Muslim countries, Generals reminded the audience that African Americans’ gifts to the world have been their spirit of liberation and resistance.

“We have the obligation to take the legacy we are celebrating here during African American Heritage Month to embrace their cause; and find ways to advance their cause, while they’re trying to liberate themselves from the types of hostility thrown against them,” he said.

Rahman inspired students to reach for uncommon achievements, in the community and in the classroom. “You are me, and I am you” he said, reflecting on his shared experiences with students hoping to follow in his footsteps.

Rahman, a “C” student until the 7th grade, eventually realized that his football skills alone were insufficient in achieving his future goals. “If  I wanted to achieve my goals, I needed to make sure that I took things seriously in class,” he said.

As he played football in high school, he simultaneously developed a deep love for math and science. Upon graduation, top universities competed to have him at their campuses, including Columbia University and the University of Pennsylvania. He chose to attend Penn, where he studied engineering, played football, and was drawn to the intrigue of entrepreneurship. 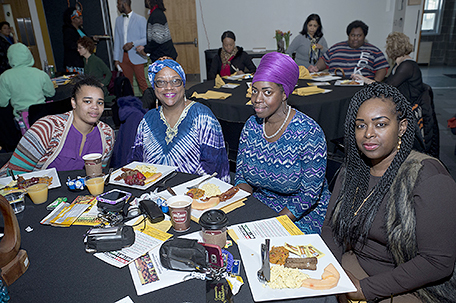 College helped him to discover his purpose, which was to launch UrbanPhilly.com to engage, empower and connect future leaders in Greater Philadelphia using technology and events. Currently, more than 16,000 people have subscribed his website. He also serves on the board of the Community College of Philadelphia Foundation, which enhances and enriches the educational experiences for students by providing external resources to support the College’s mission.

While traveling across the country, Rahman said he has discovered that people are the same in their aspirations, and that diversity has value. He cited the power of mind and imagination in envisioning a future, then urged students and staff — “to not just be a human being but a human becoming.”

With a vision and preparation, he said, people can become a leader in any given field. He added that when people have high expectations of themselves, it propels them forward. “How you do anything is how you do everything,” he exclaimed.

He encouraged students to make use of all the College’s resources and support services; and to strive to expand their network. “Be uncommon,” he urged students, and “seek opportunity not security.”

Ramean Clowney, a student, said Rahman is the ideal image of Black success to him. “This guy is phenomenal,” he said. “I learned from his life that it doesn’t matter where you started; it’s all about where you’re going — taking every opportunity for what it’s worth.”

“I really like his leadership here at Community College of Philadelphia,” he mentioned. “It was just moving for me.”