Black Girls were winning at this year’s PABJ Awards Ceremony 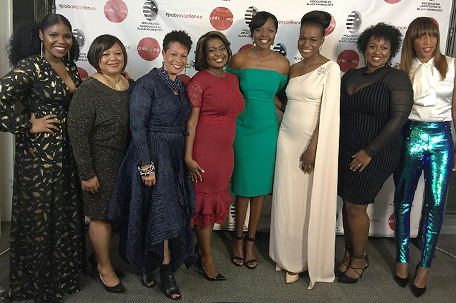 Women representing all aspects of the media were honored at the 12th Annual Philadelphia Association of Black Journalists (PABJ) Awards Ceremony and Scholarship Gala at the WHYY Studios last Saturday.

Seven women, one man and two additional women were honored posthumously as they received awards for excellence this year in reporting, media management, community service, impact, and more.

PABJ members, journalism enthusiasts, honorees and their families came from all over the area to celebrate this fantastic event and relish in the accomplishments of the awardees.

“The sold-out evening really was special, filled with lots of Black Girl Magic,” said Melony Roy, PABJ President. “And hearing from legends like Tyree Johnson, who was honored along with his late wife Barbara, for groundbreaking journalism makes PABJ proud and excited to celebrate all of our nominee’s contributions to Black communities throughout the region.”

Everyone was dressed immaculately, and smiles were abundant as journalists filled the room, inspired by their colleagues to continue to press on and tell the stories of those who may not otherwise have the opportunity.

The evening included a cocktail hour with a silent auction, followed by the awards ceremony which included a live auction. The night’s emcees were Quincy ‘Q Deezy’ Harris, host of “The Q” on Fox 29, along with co-host Christie Ileto, Action News reporter. NBC White House correspondent and former NBC10 reporter Kristen Welker shared her experiences and compared and contrasted covering the administratons of Presidents Barack Obama and Donald Trump as the keynote speaker.

Weaver is a full-time sophomore journalism student at Temple University and a student to watch out for–she has a 3.8 GPA and an anchor for TUTV’s “Update Now” and believes she has an unspoken responsibility to try to close the gaps that exist for those whose voices are not heard. On top of all of that and her coursework, she is the senior editor of the Templar Annual Yearbook and is treasurer for the Temple Association of Black Journalists.

Glover is an aspiring journalist and filmmaker, as well as a multi-sport athlete. He wishes to create films around urban issues and provide a voice for those who reside in inner cities. “Anytime you have the opportunity to make a difference in this world, and you don’t, then you are wasting your time on this earth.” The young man uses this quote as motivation for his work.

Sy has reported and written for many local publications including the ‘University City Review,’ the ‘Philadelphia Tribune’, and the ‘Daily Pennsylvanian’ with a focus on African and African American issues such as poverty, immigration rights, racism and educational disparities.

Major congratulations to PABJ and all the honorees at this year’s gala or an exceptional job done to propel our people and our stories forward!