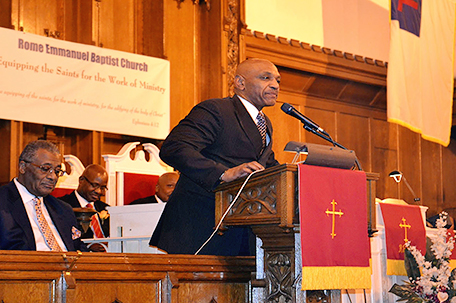 ABOVE PHOTO:  Standing front and center, Rev. Jay Broadnax, President of the Black Clergy of Philadelphia & Vicinity as they held press conference Oct. 28 to endorse Hillary Clinton for President and several other candidates.  (Photo by Thera Martin-Milling)

The Black Clergy of Philadelphia and Vicinity held a press conference Friday, October 28, 2016 at 9 AM to endorse Hillary Clinton, Katie McGinty, and the Democratic Party down-ballot ticket for the general election for November 8, 2016.  The press conference took place at Calabash Restaurant, 6208 Lancaster Avenue in Philadelphia.

The Rev. Jay Broadnax, President of the Black Clergy of Philadelphia and Vicinity stated, “I feel an obligation to speak out on the issues affecting this upcoming election after we have witnessed the negative and vitriolic rhetoric that has been employed by Republican Presidential Candidate Donald Trump.  This rhetoric has been offensive to minority communities because it incites racial stereotypes, dog whistle politics, and abusive language towards women. We firmly believe that a Donald Trump presidency would be a tragic set back to the advancements that have been made in the areas of civil rights and racial reconciliation that have provided African Americans and other minorities opportunities to advance in all sectors in American life.

Whenever we hear a politician indicate that they will be a ‘law and order’ candidate, we consider this to be coded language, a political “dog whistle” appealing to his political base that indicates to us that he will wage war on African Americans and other minorities.  What is even more disturbing is the misogynistic attitude that Mr. Trump has demonstrated, as exemplified by the video tape that emerged in which Mr. Trump is recorded using sexually abusive language towards women without any form of remorse.  For a political candidate to justify this type of behavior, excusing it as  locker room talk, is completely offensive and unacceptable.  The Black Clergy of Philadelphia and Vicinity cannot support a candidate whose political agenda has energized and given voice to attitudes of American society that need to be forsaken, and whose disdain for ‘political correctness’ is simply serving to ‘Make America Hate Again.’  We believe that Hillary Clinton has the demeanor and basic values of human fairness that make her a far superior candidate.”

Pastor Broadnax continued. “Furthermore, Black Clergy of Philadelphia and Vicinity has endorsed Katie McGinty for the following reasons: first, we believe that it is very important for the United States Senate to bring forth a Supreme Court nominee for both the House of Representative and the United States Senate to consider for a vote.  Senator Pat Toomey has refused to allow this process to occur.  Secondly, a politician only shows that he believes that ‘all lives matter’ when he demonstrates that he believes that ‘Black Lives Matter.’  As Sen. Toomey attempted to completely discredit the Black Lives Matter Movement in his debate against Katie McGinty, we have no alternative but to conclude that he has no understanding of issues that African Americans have with the criminal justice system.  Therefore, we have concluded that we cannot support Senator Pat Toomey in this upcoming election.  Katie McGinty has demonstrated that she has the sensitivity, work ethic and character to fight for issues that we believe in,” he said.

In conclusion, Broadnax said, “This election is very important on November 8, 2016.  We firmly believe that if Hillary Clinton becomes President of the United States of America, she needs a House of Representatives and the United States Senate that will work with her to ensure an infrastructure bill is passed to provide jobs to American citizens, to provide assistance to students struggling with student loans, and to ensure that both houses of Congress will do all that they can to fill the vacancy in the United States Supreme Court.  For these and other reasons, we offer our support to Hillary Clinton, Katie McGinty, and the Democratic down ballot ticket.”

Rev. Jay Broadnax is the current President of the Black Clergy of Philadelphia & Vicinity. He is the pastor at the Mount Pisgah A.M.E. Church in West Philadelphia. The Black Clergy organization has a membership of over 400 Pastors and other Clergy members and they’ve  been in existence for 35 years.