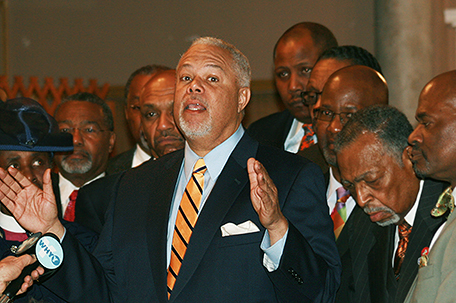 ABOVE PHOTO:  Sen. Anthony H. Williams speaks to guests at the Black Clergy of Philadelphia and Vicinity’s Prayer Breakfast regarding their endorsement of him for mayor.  (Photo by Leona Dixon)

On Thursday, the Black Clergy of Philadelphia and Vicinity endorsed State Sen. Anthony Hardy Williams for Mayor in the 2015 Democratic Primary. Clergy President Rev. Terrence D. Griffith said the ministers found Sen. Williams a strong advocate for African American issues who had the integrity and experience to address the problems and hopes of their members.

“Clergy has had the opportunity of working with Senator Williams on a number of issues that impact out communities. He has been a strong advocate for our people. And clergy has honored him with its endorsement to chart the destiny of Philadelphia for future years ahead.”

Senator Williams said he was humbled by the support of the city’s ministers group.

“ The church has always been a moral compass and an unparalleled, historic voice of the black community”, Williams said. “It has been the backbone of activism in securing civil and human rights as well as empowering people who were formerly excluded from participation in policy decisions that can and have changed our lives.”

The stated mission of the Black Clergy is to “unify African-American Clergy of various denominations to promote Christian principles, equality, justice, brotherhood, community improvement, economic development, job fairness, housing, education, and Black awareness to enhance the welfare of African-Americans in Philadelphia and Vicinity”. The activist group has had an abiding concern about education since 1981 when they blocked Broad Street to help end a 50 day school strike. These ministers have been active in electing Black officials for 30 years, going back to the election of Wilson Goode, the city’s first African American mayor. They have taken positions on housing and community development issues; many pastor churches that created Community Development Corporations providing senior housing, day care or early education facilities and programs.

The Senator has his own roots in the Baptist Church as a member of Mt. Carmel Baptist church (for years). He believes that communities of faith are underutilized resources and valuable partners to government. Among other issues, Williams and the clergy share a deep concern for decreasing Philadelphia’s 26 percent poverty rate, generating living wage jobs for high school graduates and broadening the local economy through opportunities in the energy industry.