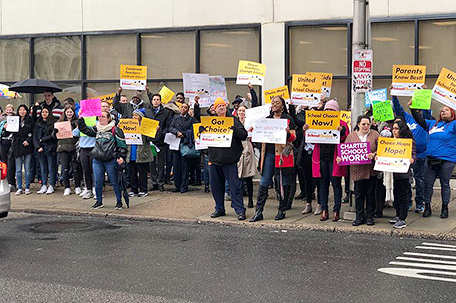 A coalition of educators, political officials and parents came together to demand equality for Black-owned and operated charter schools from the School District of Philadelphia.

About 70,000 of the School District of Philadelphia’s student body goes to a charter school. Of those charter schools, only 22 are Black-owned or operated, and those schools have a target on their backs, Naomi Johnson Booker, founder and CEO of the Global Leadership Academy Charter School, said.

And the targeting is obvious.

“For over 20 years, Black founded and led schools have succeeded in providing a high quality, culturally rich educational program for students that celebrates a child’s heritage and ethnicity,” she said. “But we have also suffered through the process of just existing and being recognized as an important part of the educational landscape here in Philadelphia. Our schools have collectively dealt with racism, discrimination, inequity, and biases when it comes to our schools’ oversight, expansion renewal, and funding opportunities. And many times, when schools have spoken up, there has been retaliation.”

Because of this, Johnson Booker and the African American Charter School Coalition announced the Black Schools Matter Campaign at a virtual press conference on Tuesday.

The gathering included educators, parents and public officials who unified to send a message to the School District of Philadelphia’s Charter School Office: either treat us more fairly when it comes to resources and closures or prepare for pushback.

“Today, the Black founded and led schools who are still here have come together, united to say, enough is enough,” Johnson Booker said. “We are done being silent. We are done being treated unequally, and we are done sitting on the sidelines with no support and no action.”

Among the actions that the group will be taking with the Black Schools Matter campaign is to correct the record on these schools, highlight the inequities that exist the charter school system in Philadelphia and demand corrective action, including the suspension of closure activity for Black-owned and operated charter schools, said Stacy Phillips, founder and CEO of the West Philadelphia Achievement Charter Elementary School.

“We will highlight what sets our schools apart from others, and demand equity when it comes to funding opportunities, renewal, and expansion,” Phillips said.

The campaign hopes to accomplish the following goals, Phillips said.

*Recognition and acknowledgement that Black-owned and operated charter schools need to be a permanent and viable option for children and families in Philadelphia;

*The creation of a non-biased system of public charter oversight, renewal and expansion opportunities for our Black founded and led schools;

*Revamping the School District of Philadelphia’s Charter Schools office in a way that promotes fairness and transparency when it comes to evaluation, oversight and expansion opportunities. The group also wants a moratorium on closing all Black owned and operated charters until they feel this inequity has been addressed;

*Connect Black owned and operated charter schools to the opportunities for additional funds, resources and philanthropic supports that other charters enjoy; The Coalition hopes to work with the School District, community stakeholders and elected officials and the local and state level to address all of these issues of inequity and bias, said Lawrence Jones, CEO of the Richard Allen Preparatory Charter School.  “We’ve already met with the head of the Charter School Office about many of the issues we’ve discussed today, and we also put the Board on notice,” Jones said. “Our goal is to work in partnership with the school board and the Charter office to address these issues, but if that is not possible, we will be prepared to take further action until we are treated fairly and equally. Our voices matter and the issues of systemic bias have to change.”

For parents like Elaine Wells, the determination to make things more equitable for Black owned and operated charter schools is important because of what that equality could do for Black children.

If schools like Boys Latin, the school her children attended, were given more to work with, results like the ones Boys Latin has managed to achieve — results that include some of the best graduation and college attendance rates in the city — could be duplicated. “I can’t express what this means to me as a Black parent,” she said.