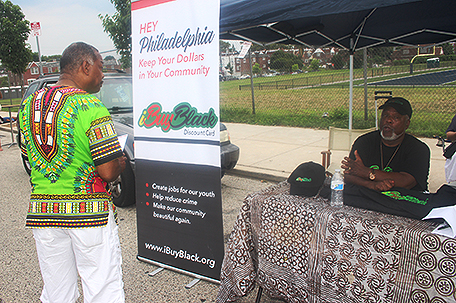 ABOVE PHOTO:  Kofi Asante speaks about the Buy Black Discount Card to  the people who were attending the Northwest Community Fest.   (Photo by Robert Mendelsohn)

As more and more businesses sign on, the I Buy Black card is starting to make an impact…and there’s more to come on the horizon.

For the last eight years, Dennis Sproul has run the dry cleaners and done a good job for his North Philadelphia customers.

When he heard about the Philadelphia Community of Leaders economic empowerment effort, the I Buy Black card, Sproul went to the effort’s website, IBuyBlack.org and signed up. Currently, he’s the only dry cleaner among the more than 300 businesses that are a part of the I Buy Black directory.

While it’s a relatively new effort, he’s glad to be a part of it and is confident that as more cards are purchased, more people will be coming into his shop for a 10 percent discount on purchases of $10 or more.

“It’s supporting Black businesses,” he said. “It was just put into effect, but people will start coming in and using it.”

From auto repair shops to travel agents, the I Buy Black Card directory has become a clearinghouse for people who want to spend small.

Almost 2,000 people have purchased the cards and more and more businesses are joining the effort every day, said Earl Harvey, sales director of IBuyBlack.org and owner of two of the businesses in the program, Chestnut Hill’s Platinum Grill and the Black Professionals News paper.

The goal is to have 10,000 I Buy Black cards on the street by the end of 2017, said Michael Rashid, IBuyBlack.org’s program director.

It’s become very popular. But with a little more outreach and education, it can really take off, Rashid said.

“Everyone we talk to likes and supports the idea,” he said. “All we need to do is get the word out more. Plus, we’re fighting some established habits. [African Americans] are used to shopping in places other than Black businesses. It’s going to take some effort.”

One of those efforts is currently being negotiated, Rashid said. I Buy Black is currently talking with economist Boyce Watkins about ways that the two entities can work together to help increase economic empowerment, he said.

Another effort begins in August. August is Black Business Month, and I Buy Black will hold its first Black Friday event. Businesses involved in the program (and their discounts) will be featured, Harvey said.

“We don’t want people to forget these smaller businesses,” he said, “so we’re doing something similar to American Express’s Small Business Saturday.”

But that won’t be the organization’s only effort, Harvey said. There are also plans for an I Buy Black bus tour, that will allow cardholders and anyone interested in patronizing these businesses the chance to do so without having to figure out where to park.

It’s a twist on an idea from Philadelphia’s past, Rashid said. The late WDAS-FM DJ Georgie Woods used to do something similar, he said.

When the I Buy Black bus tours start, Harvey hopes they’re multicultural. If you’re a fan of small businesses, you’ll find something to love here, he said.

“We want everyone to buy a card, get on board, and get interested in what we’re doing,” Harvey said. “Anyone who wants to support small businesses is welcome.”

There is also talk of the organization putting together a Black Restaurant Week similar to the one that the I Don’t Do Clubs organization does in New York.

For more information on the I Buy Black Card and it’s participating businesses, go to IBuyBlack.org. The card is $10 and can be purchased on the website.