Black and Planted: Helping community, flowers, and plants to grow together 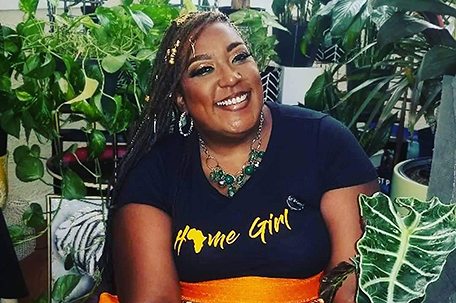 A major lesson that the COVID-19 pandemic taught us was how to adapt our lives in a way that enabled us to continue working while minimizing disruptions.

The disruption required creative adaptation for those whose work relies heavily on one-on-one interactions.

Although social media and Zoom provided some continuity, the lockdowns gave many people the opportunity to rethink their missions and objectives.

Erika Johnson, a Germantown resident responsible for organizing in-person events, summits, and workshops for women and teens for over 15 years, was one of them.

Johnson, 45, was no stranger to career transitions. She worked as a healthcare professional, in the hospitality industry and as a makeup artist for over 20 years before founding her own successful skincare and cosmetics line. Having achieved that success, she was able to offer etiquette classes and other programs to girls as part of her Stiletto Network Leadership Academy. Among her goals with the classes was to fill the instructional void created by the widespread discontinuance of home economics school programs, which routinely taught things like table manners and proper seating. Through the Stilletto Network Leadership Academy, Johnson collaborated with like-minded organizations to offer etiquette classes and other workshops. The work was necessary, she said. “That’s what we were trying to provide,” Johnson said. “There was that space in the community with other organizations that were doing the same thing, and [we hoped] that maybe [they would] come on and serve as either volunteers or instructors as well.”

Then, the pandemic struck.

In those early lockdown days, when everyone was confined to their homes, uncertain when ‘normal’ life would resume, reexamining one’s goals became especially important, she said.

“Everyone started to get into whatever their niche was, and mine happened to be plants,” she said. “I found a couple of social media groups where there were a lot of activities, not only just for those in the planting community, but those in the Black community that involved finding out who they were, who the farms were, where the stores and shops were, where they had businesses or were selling things, locally and across the United States.”

Realizing that they all had something in common, Johnson began networking with Facebook sites like Black Planters, Black Girls Who Container Garden and Black Plant Mamas, among others. As the networking organizations exchanged advice, pictures, jokes, and memes, they decided that they wanted to do more, she said. As an outgrowth of the Stilletto Network Leadership Academy, Black and Planted was created.With a focus on plant styling and floral arrangements, Black and Planted also offers educational community events and workshops, event hosting, vending, signature apparel and lifestyle products.

The name “Black and Planted” signifies being rooted like plants within the Black community, being rooted within oneself, and sharing knowledge and resources with each other, Johnson said.

One of Black and Planted’s directives is also to help schools, churches, and businesses plan and plant their own flower, vegetable, and fruit gardens — a true community effort.

National networking has also brought attention to those doing similar work in their own cities and towns, and how they should get to know and support one another, Johnson said.

“There’s a huge community there and we’re just trying to make sure that everybody knows about it,” she said.

Among her major inspirations for growing plants and flowers were Johnson’s late father, Nathaniel Johnson, and her paternal grandparents, Louise and Oscar Nathaniel Johnson, who had a backyard garden. Although her grandmother is deceased, her grandfather recently celebrated his 100th birthday.

Johnson said that he is aware of her work and is proud of it. “I learned from them being in the yard how to pick a tomato right off the vine, go in the house, put a couple of sprinklings of salt on it and eat it fresh like that,” Johnson said. “So that is something that’s definitely ancestral for me.”

With the rise of urban gardening during the pandemic, many have become more aware of how disconnected they are from our food sources, how dependent they are on food suppliers, and how vulnerable they are to food shortages.

A huge need exists in our communities for those resources, and residents need to be connected to those who are addressing those needs, Johnson said.

“When those organizations come into our neighborhoods, and they give us free produce and free food, it’s an awesome resource for our communities, and our communities need it,” she said. “It is an absolute necessity.”

Gardening is a learning process and an integral part of community life for those who want to learn it or teach others how to do so, Johnson said.

“I always say that at least one person in the family, your group of family or friends should be able to grow, and then that way, you can feed everybody,” she said. “If I have one cucumber see and I can turn it into 15 cucumbers, I can feed people — that’s the goal. That’s the village aspect. … and that’s why it’s so important for us now in its transition to know where the farmer’s markets are, know where the organizations are that are giving out free food during the week or [who have] food banks that can drop off food for our kids, senior citizens or those that are in need.”

Black and Planted also serves as a community bulletin board for people to find these resources — via email, social media, or other means — to bring people offering their help and people in need together.

“There are many organizations that are working for it,” Johnson said. “We just want to connect the people to it, and like I said, it takes [just] one person to want to educate and to want to teach, and once they help somebody else, it may inspire somebody else.”

Many people don’t realize gardening is a year-round activity, even beyond spring and summer, Johnson said.

Last year, Johnson, along with her colleague Candy, came up with the Jabali Jungle PopUp Experience as a name for her first Black and Planted community event. Jabali means ‘rock’ in Swahili, a nod to Africa and something she felt was important to include, especially in light of what we have experienced during the pandemic.

“When I think of rock, I think of our community,” Johnson said. “I think of resilience. I think of strength, and at that time, [how] we were trying to get through the pandemic and get through everything that we have been through.”

This year’s event, which is free of charge, brings together all the unique aspects of the African American community that make it a village, she said. It is taking place on August 27 from 12 – 4 p.m. at the Wyck Historic House, Garden and Farm, located at 6026 Germantown Ave. in Germantown. It will feature even more in-person interaction than last year’s hybrid event.

There will also be panel presentations from two local urban farms and gardens — Pleasant Playground Community Garden and Dirtbaby Farm. Increasing community awareness and creating similar initiatives throughout the region is one of Johnson’s goals.

In addition, there will be a community seed exchange sponsored by Germantown Residents for Economic Alternatives Together (GREAT).

“If you have a packet of seeds that you want to bring, or you have a couple of seeds at home that you want to bring, you can bring them to the table and you can swap them out,” Johnson explained. “You can get some more seeds. [For instance], let’s say if I had some carrot seeds or something, but I needed some collard green seeds. I’m going to bring my carrot seeds and then I can [exchange] them for those collard green seeds.”

Several pop-up plant and plant accessory shops, some from out of state, will be participating, Johnson said. In addition, Black & Planted will be offering some fall vegetable starts, and there will also be an opportunity for attendees to plant their own seeds in a cup to take home and nurture.

The It Takes A Village Foundation will be on hand to distribute free school supplies.

There is still time to get involved with the Jabali Jungle Pop Experience. Flowers and balloon donations are especially needed for the complimentary bouquets they plan to give away in honor of Johnson’s grandmother Louise and her friend Monica Joy Davis, she said.

Those who sell plants or have urban farms with a similar focus are also encouraged to get involved, she said.

“We want to work with you,” she said. “You want to connect and collaborate with you. Please contact me at [email protected].”

For more information about Black and Planted, visit: www.blackandplanted.com/.

A college plants a garden, and a healthy learning community

Top 2012 garden and lifestyle trends: cultivate the new good life with the power of plants